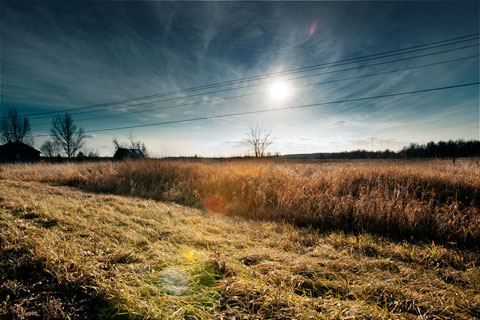 Tina and I head­ed to a cou­ple of small towns around Ottawa. She had her Nikon and I was armed with my new Canon 5D Mark II, which is a full frame cam­era and gives me such won­der­ful­ly wide angles. You can see her shots at her flickr set. They give me great ideas on how I can look at things from anoth­er per­spec­tive because they’re so dif­fer­ent from mine, approach­ing shots from clos­er ranges and com­pos­ing with more diag­o­nal angles. 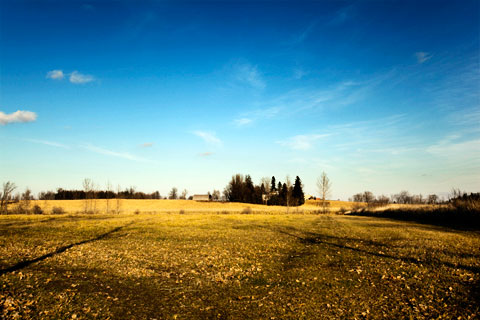 This is by far my favourite shot (above), and I’ll prob­a­bly get a large print of it when I have the mon­ey. There’s a series of acrylic paint­ings by Ken Vincent at the Koyman Galleries in Ottawa, and I’ve always want­ed this one in par­tic­u­lar because the colours and the moody clouds speak of pure emo­tion to me, and I nev­er believed I was capa­ble of cap­tur­ing such moments with my last cam­era1. The price — $2300 for a 28“x61” paint­ing — had always held me back, but now I’m con­fi­dent I can get that elu­sive look I’ve been try­ing to cap­ture, myself.

END_OF_DOCUMENT_TOKEN_TO_BE_REPLACED

If it has­n’t been painful­ly obvi­ous, I’ve fall­en off the wag­on. I’ve been think­ing about her again.

But it isn’t my fault.

You see, she came by my work and gave me a box of home­made short­bread cook­ies in a cute lit­tle box (as well as some for my oth­er co-work­ers). I would nor­mal­ly say that it’s a nice ges­ture, but in this case, it was a cru­el and painful reminder of what I had lost. But that pain sub­sided as I ate them (admit­ted­ly, in one sit­ting) and I decid­ed to for­give her for that one. It’s hard to stay angry when the sug­ar and but­ter hits your brain.

Then she walked by at a con­cert, and squeezed my arm as she was pass­ing by. I did­n’t even know she was there until it hap­pened. Then she did it again.

This whole time, I’ve been try­ing to get over things by stay­ing away, and I was doing pret­ty well, until the touch1 of her hand fanned the ash­es of pas­sion that were left smol­der­ing in my chest, revers­ing sev­er­al weeks of emo­tion­al recov­ery.

I told my friends I knew I was being self­ish, because I’m the weak­er one for not being able to han­dle it when she’s dat­ing some­one else2. But they tell me it’s not self­ish, it’s self preser­va­tion. That I’m just tak­ing care of myself, and she’s the one being self­ish and incon­sid­er­ate, because she’s not respect­ing my wish­es to keep a dis­tance. I’ve since stopped feel­ing guilty for stay­ing away.

Still, I’m left with this won­der­ing. What do her actions mean? What is she try­ing to com­mu­ni­cate? What does she want?

I can only guess that she wants to remain friends, but there’s this stu­pid hope in the back of my mind that it meant some­thing more. Maybe it’s a habit; I lived with that hope for more than a year as we fell into a rela­tion­ship at arms length.

I’ve con­sid­ered going back to her and ask­ing for some clo­sure — some real clo­sure — but I don’t think even she can explain her actions at this point. And if she could, her answer would prob­a­bly be the same as it’s always been.

But I real­ly don’t know for sure because she’s cho­sen not to stay away, against my wish­es, and my heart feels like it’s hang­ing by a thread. I doubt she’s doing it on pur­pose, but yet again, she gets to fig­ure things out at the expense of my emo­tion­al sta­bil­i­ty. After all, it’s hard me to move on when mixed sig­nals are hold­ing me back, like an open, gap­ing wound con­stant­ly being picked. 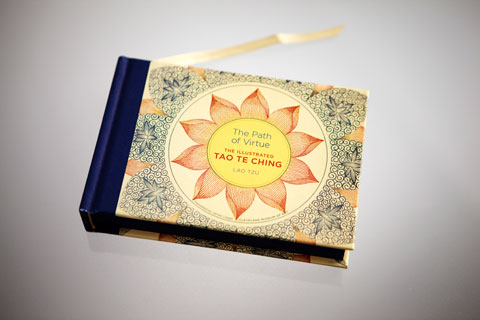 Louise gave me a gor­geous copy of the Tao Te Ching. It’s trans­lat­ed by James Legge, with clas­sic Chinese art from the Cleveland Museum of Art. What’s espe­cial­ly cool is that the fonts used for the titles is Avenir, which is the same font I used for my sec­ond Tao tat­too. 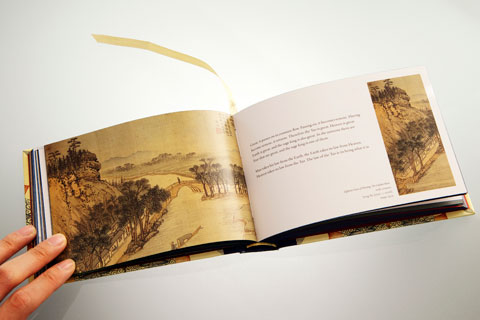 It’s per­fect because I feel like I’ve strayed from the path late­ly. It’s been a few weeks since I picked up the book and read a few vers­es. 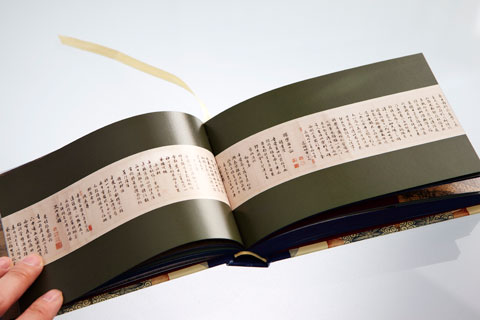 I real­ly like the fact that many of the pages have no vers­es, and only art­work. It’s nice enough that I’ll prob­a­bly keep it out on my cof­fee table, instead of in my book­shelf hid­den in a clos­et1. 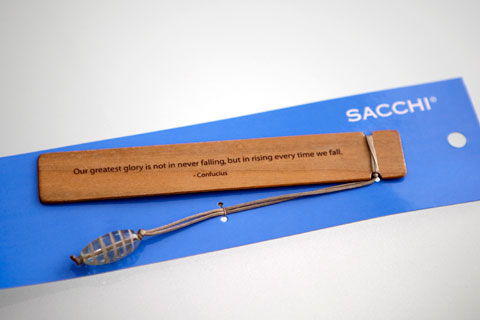 She also gave me this bam­boo book­mark, with a Confucian say­ing on it. I find it fun­ny because Confucianism oppos­es Taoism, though they both have very good ideas.

END_OF_DOCUMENT_TOKEN_TO_BE_REPLACED

When I was dat­ing Louise, and we talked about our exes, she told me one of hers was going to be a diplo­mat, and they broke up because she knew she was­n’t meant to be a diplo­mat’s wife. I under­stood. By mar­ry­ing into cer­tain careers, you mar­ry into those respon­si­bil­i­ties as well, and they can be too much for some, me includ­ed.

So she was with me. I was­n’t bound for great­ness like that.

Still, it made me won­der; what was I meant for? What did she see in me?

I know I wasn't meant to changed the world.

But I still think I was meant to affect the lives of oth­ers. I was born for great­ness of my own, as small as it may be.