The detour took a week off my time in France, and soon I was on a mis­sion to do the most impor­tant things with the two days I had left. I decid­ed to vis­it places that meant some­thing to me, instead of tourist attrac­tions like the Louvre and Eiffel Tower that did­n’t have as much of an emo­tion­al con­nec­tion. 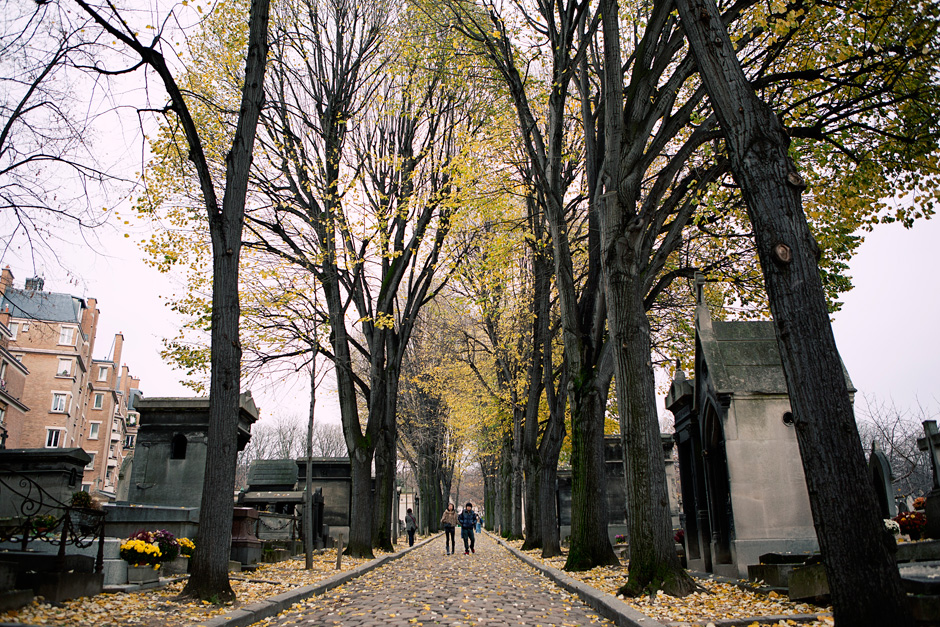 I’d only found out about ceme­ter­ies Montparnasse and Père Lachaise — both of which are notable for hav­ing many famous peo­ple buried there — after my arrival. They’re both huge (nav­i­gat­ing them requires look­ing up the prop­er street name), but Père Lachaise in par­tic­u­lar has the rep­u­ta­tion of being the world’s most vis­it­ed cemetary. I made no plans to vis­it them until I found out that Serge Ganisbourg is in Montparnasse, and Yves Montand, Edith Piaf, and Chopin are in Père Lachaise. So I made a trip to some­what oppo­site ends of Paris to find the graves of each of these musi­cians. For each one that I vis­it­ed, I put on my head­phones and lis­tened to one of their songs, imag­in­ing they were singing or play­ing to me at that moment.

It was­n’t hard to tell that Serge is one of France’s most beloved artists; the tomb was lit­tered with var­i­ous baubles, plants, and even por­traits left for him. As I was lis­ten­ing to this song (co-inci­den­tal­ly, ref­er­enc­ing songs sung to Jacques Prévert’s poems, such as the one by Edith Piaf below), a tall, sandy-haired young man walked up to the grave, lit a cig­a­rette, and left his lighter stand­ing upright on the tomb before walk­ing away.

The French youth seem to have an healthy obses­sion with the genius that was Serge. I’d just like to know where these peo­ple are, because I don’t know a sin­gle per­son who loves Gainsbourg as much as I do. I need to find them so we can smoke cig­a­rettes, mock pop cul­ture, and talk about want­i­ng to fuck Whitney Houston. 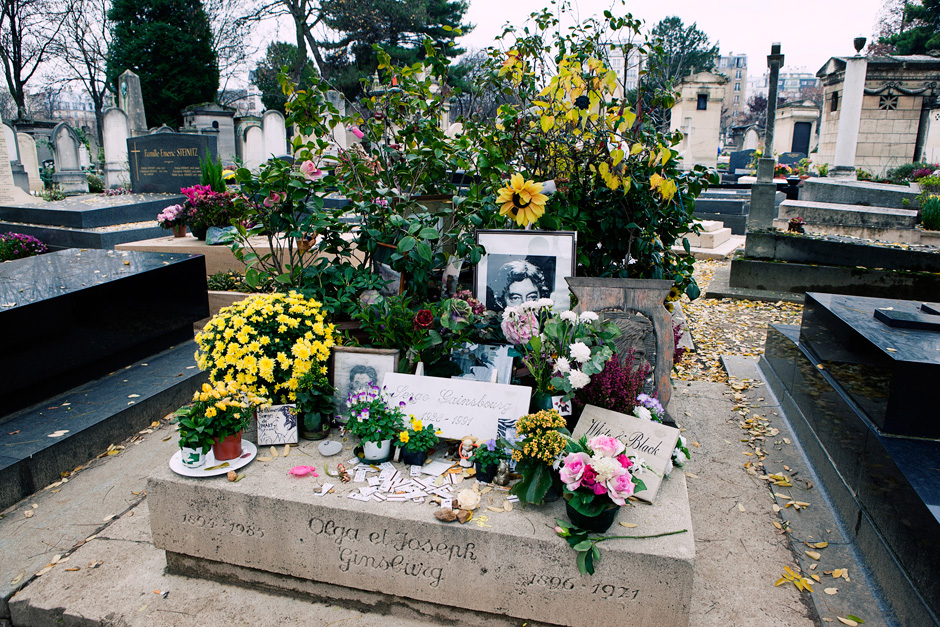 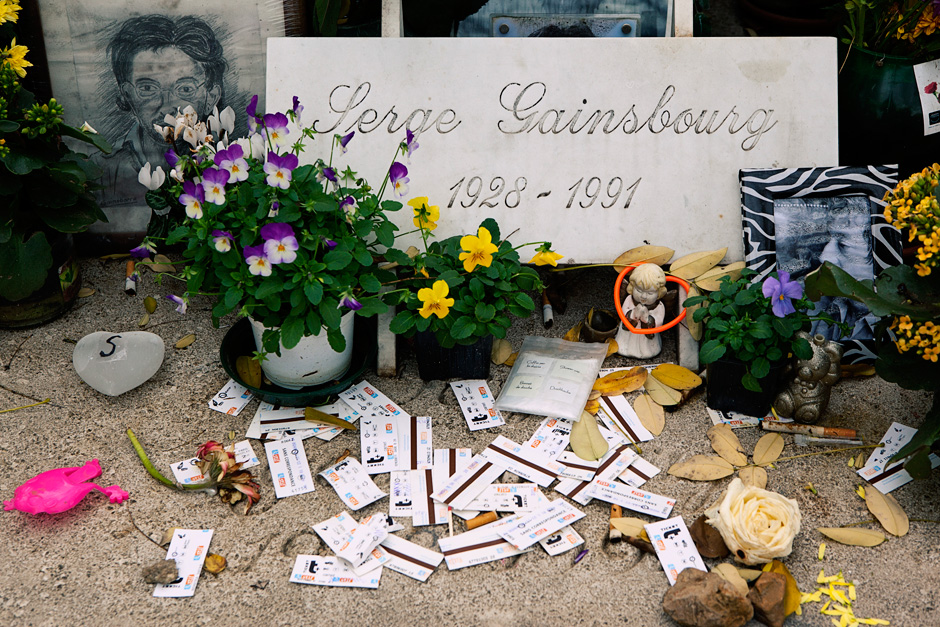 The small white strips are metro tick­ets (they get spit out from the machine as a receipt when enter­ing the sub­way). 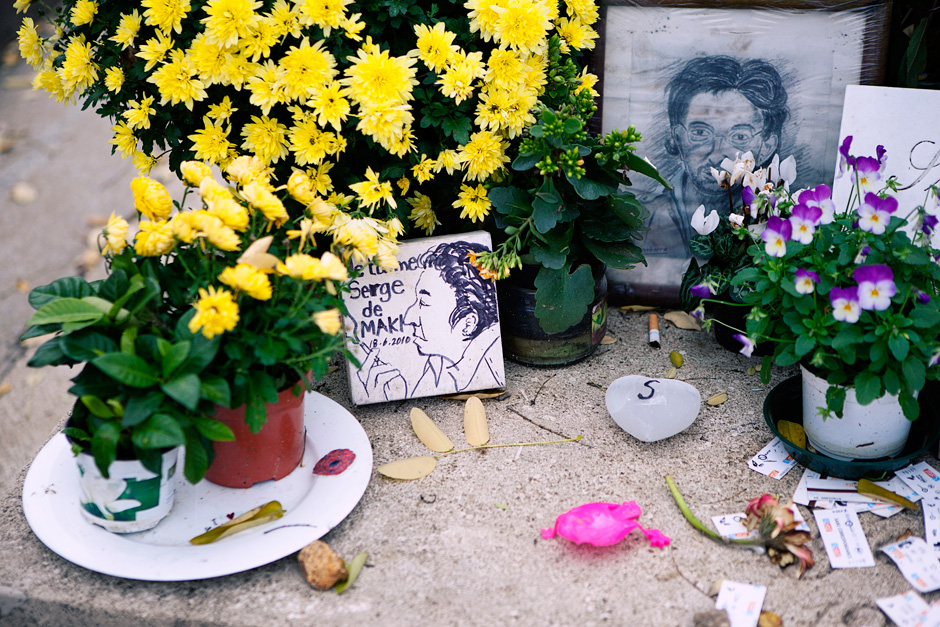 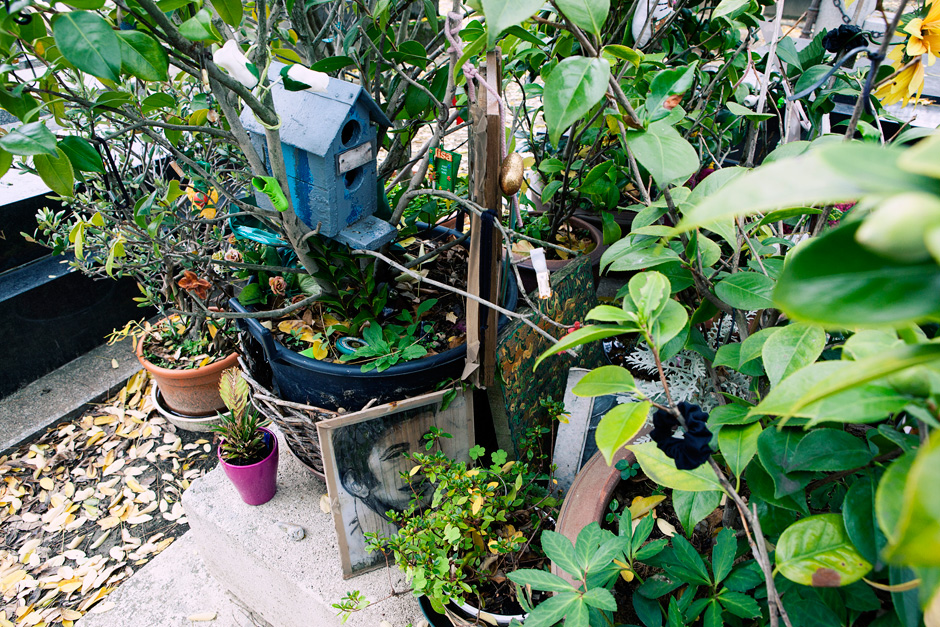 The plants by his grave spilled out the back, form­ing a gar­den in itself. 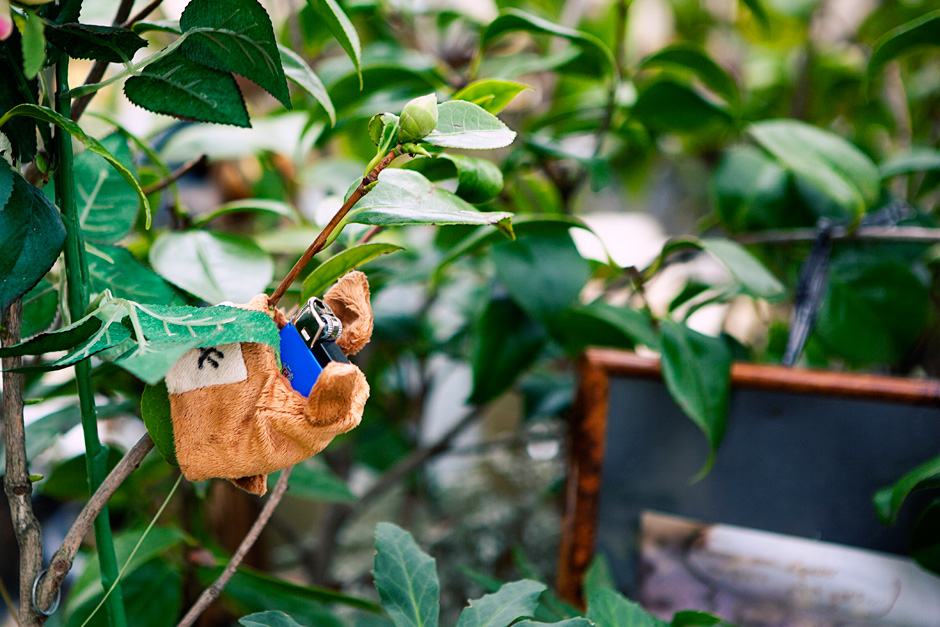 A lighter wrapped in a plush bear fig­urine. I’m sur­prised I did­n’t see a flask, cause his drink­ing stood out more to me than his smok­ing.

Yves Montand and his olive oil voice was my first intro­duc­tion to chan­son many years ago. You can­not pos­si­bly lis­ten to his songs with­out want­i­ng to sit at a café in Paris with a cof­fee and a baguette. It was Montand who cat­alyzed my inter­est in Paris and it’s cul­ture. 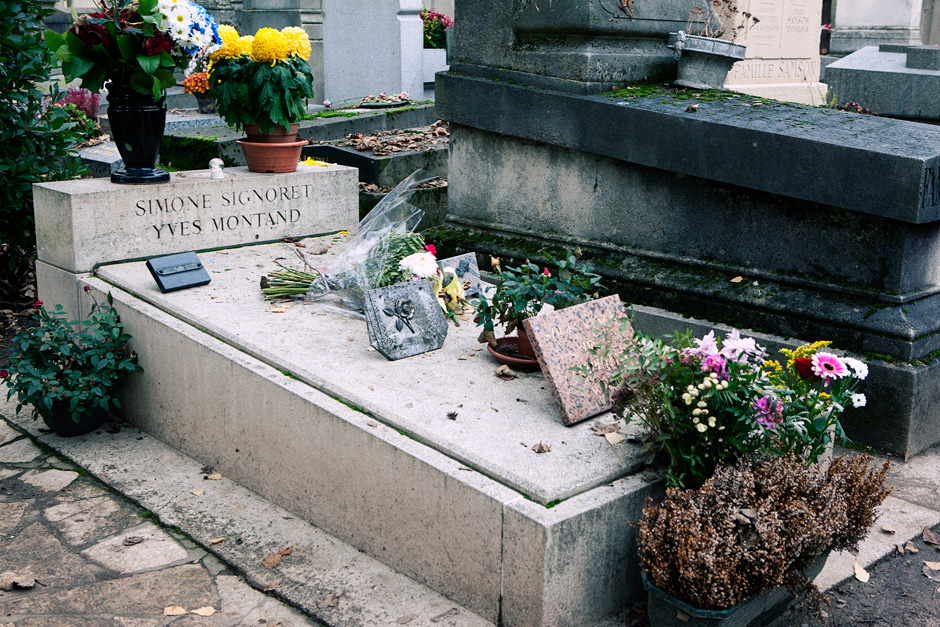 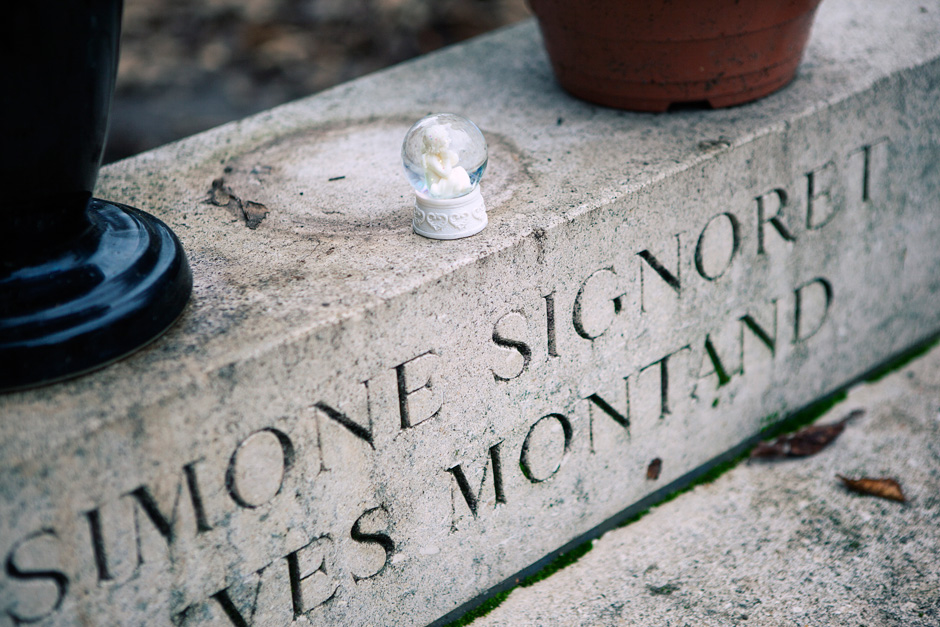 When I think of Édith Piaf, I think of La Vie en rose and Non, je ne regrette rien, but I could­n’t help from lis­ten­ing to Les Feuilles Mortes among the yel­low leaves and the graves. I have so many ver­sions of this song, and this one stands out as being in both French and English, which I’ve always enjoyed as being a mix of cul­tures. 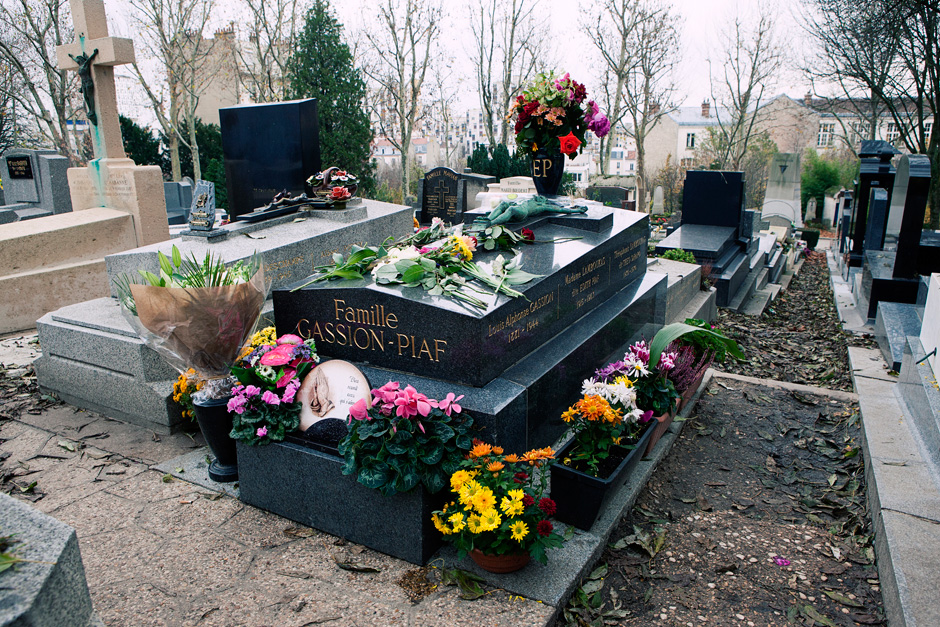 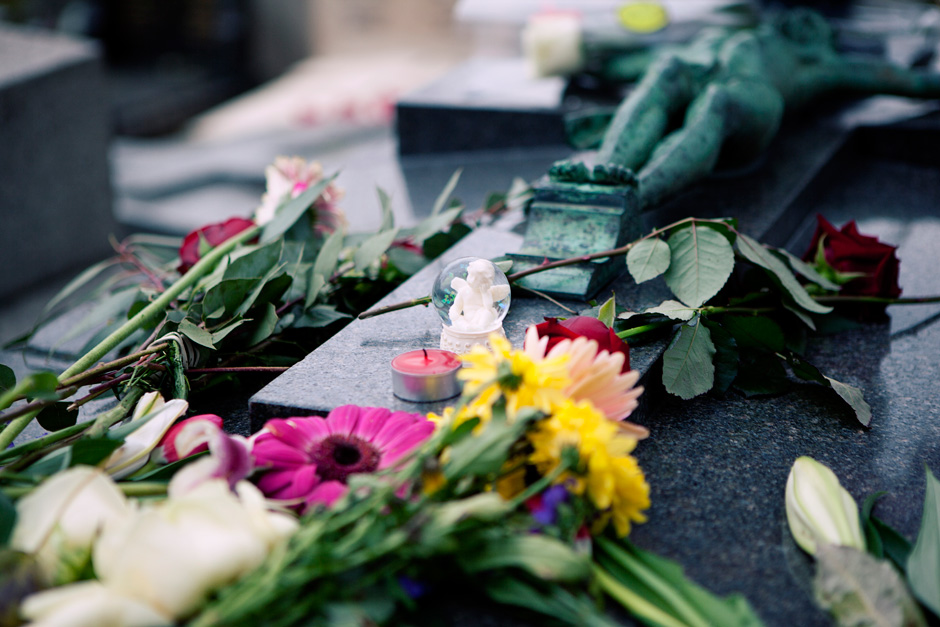 Someone left the same minia­ture angel snow­globe here as on Yves Montand’s grave. I won­der what the sig­nif­i­cance was.

I found it inter­est­ing that Chopin, a Polish-born com­pos­er, would be in a ceme­tery in France (his heart was sent back to Poland and stored in a church pil­lar in Warsaw). But here he was, with a majes­tic tomb crammed into a tiny area in a small street in Père Lachaise. Chopin’s noc­turnes are a per­fect blend of sub­tle mood and sweep­ing mas­tery. They helped me get through many lone­ly nights in uni­ver­si­ty. 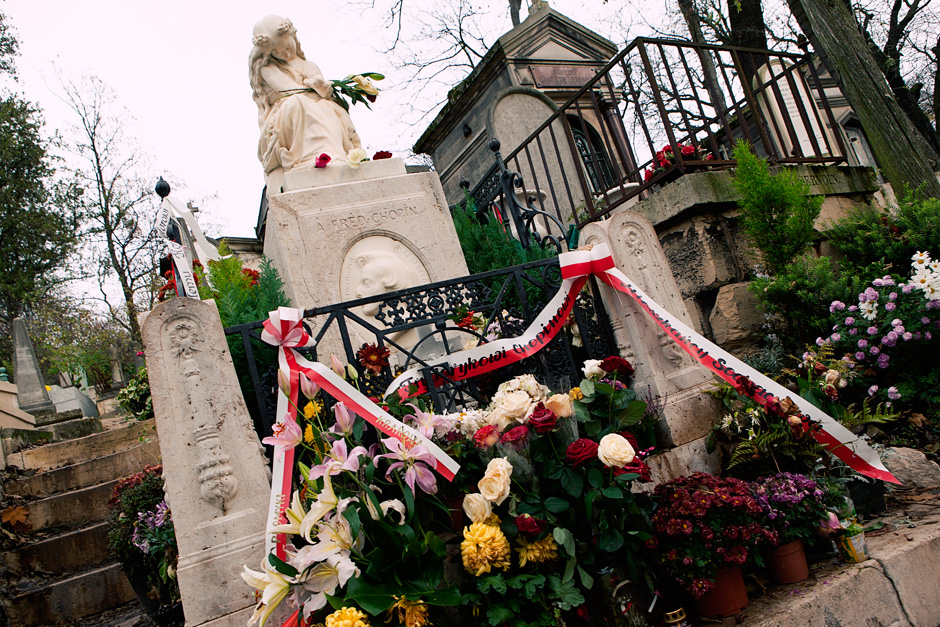 The pots of well-kept flow­ers, many of them ros­es, reveal his influ­ence as a com­pos­er of Romantic music. He must have had mad groupies. 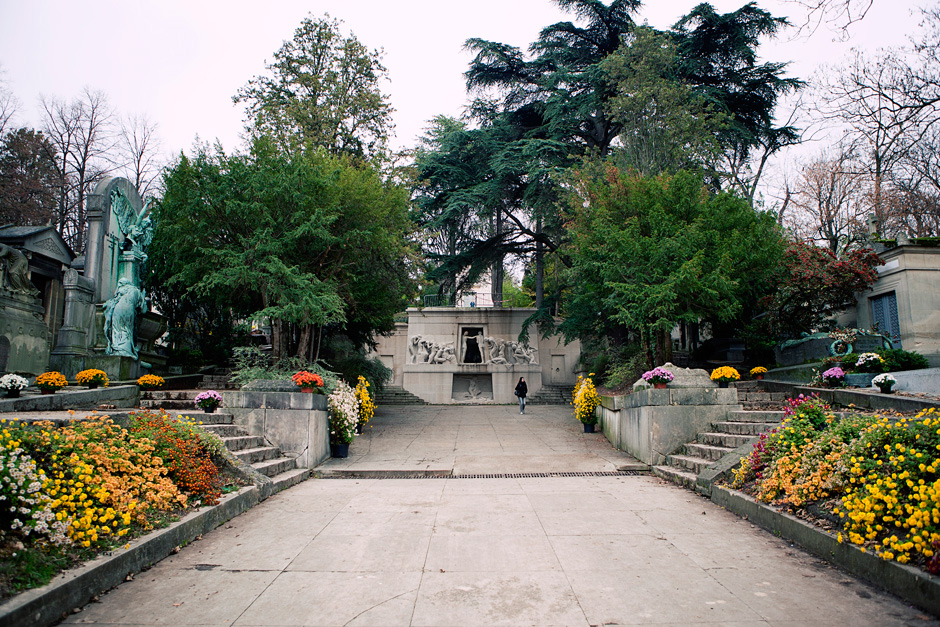 The entrance path into Père Lachaise, with a carv­ing named Aux Mortes by Paul Albert Bartholomé, inspired by his wife’s death. 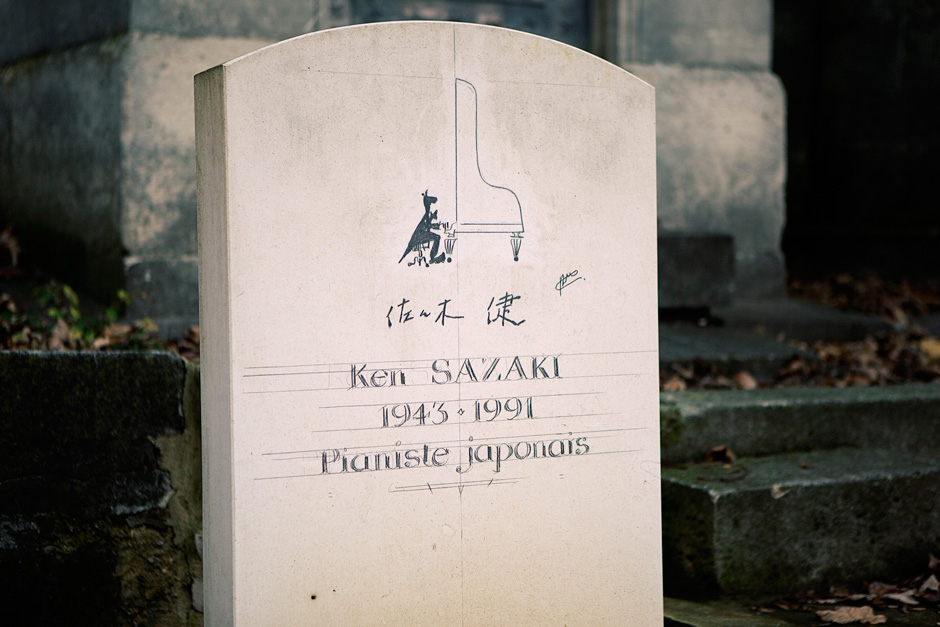 I don’t know who Ken Sazaki is, but I love the sketch feel­ing and sim­plic­i­ty of his tomb­stone. 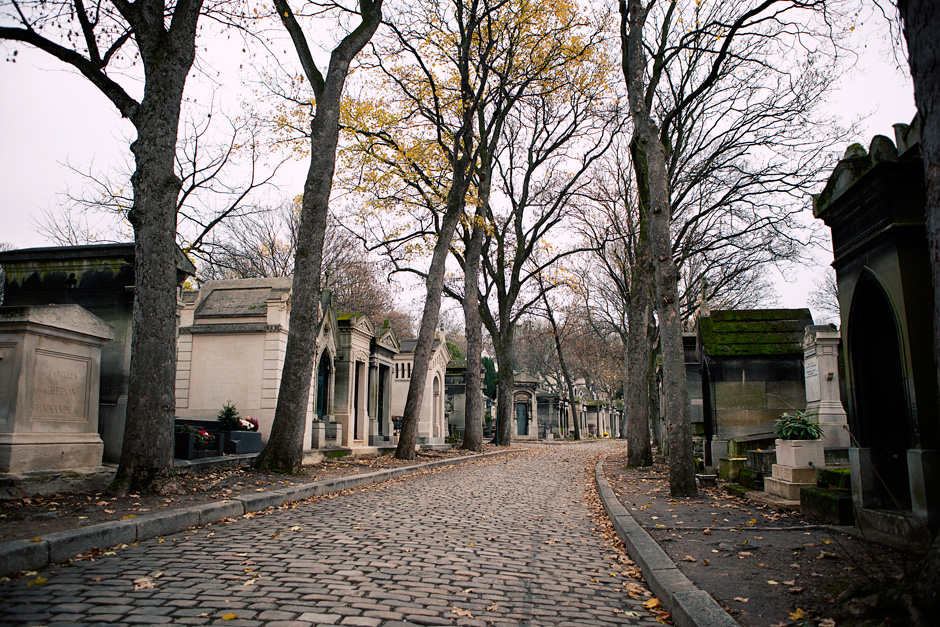 Montmartre is a hill in the 18th arrondisse­ment of Paris filled with Parisian flavour, and known as one of the artis­tic cen­tre of Paris. It’s pop­u­lar­i­ty as a tourist des­ti­na­tion also means there’s a fair share of tourist traps (i.e. over­priced cafés and sou­venir shops). On one of the stair­cas­es here is where Fédéric pro­posed to Misun. 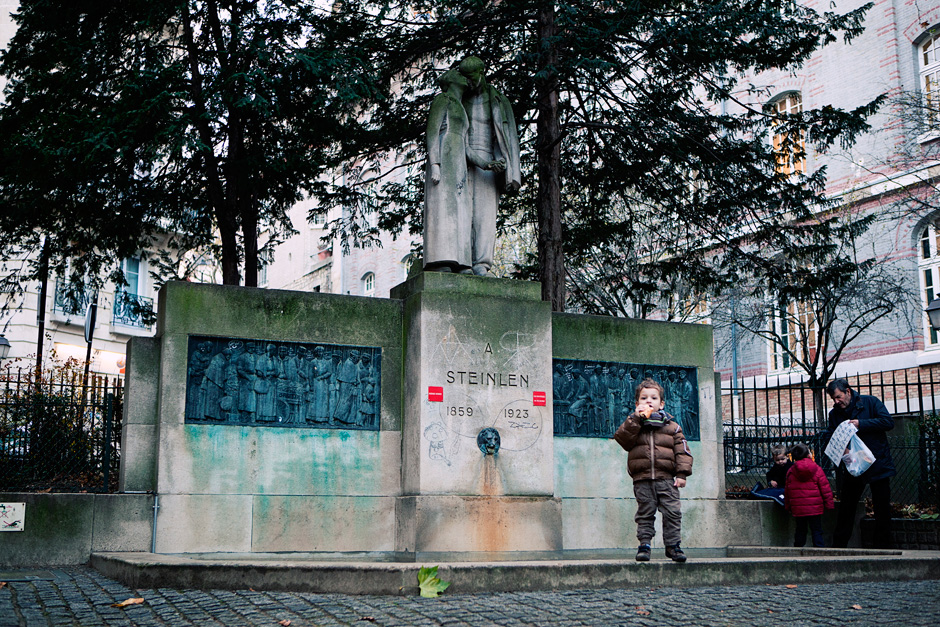 I can eat my baguette and judge you at the same time. 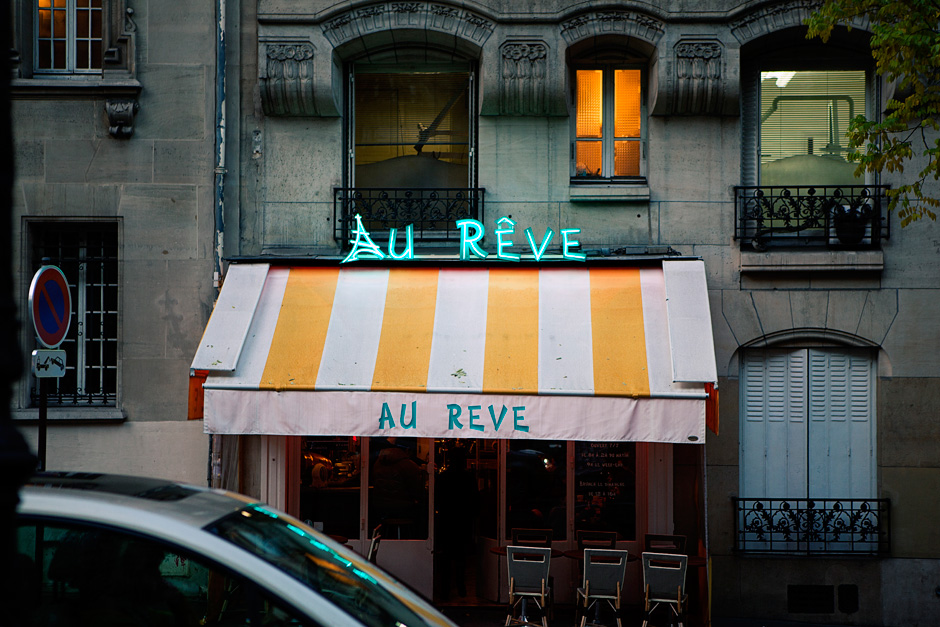 Love the Eiffel Tower “A”. I won­der how much of their busi­ness this clever lit­tle design idea gets them. 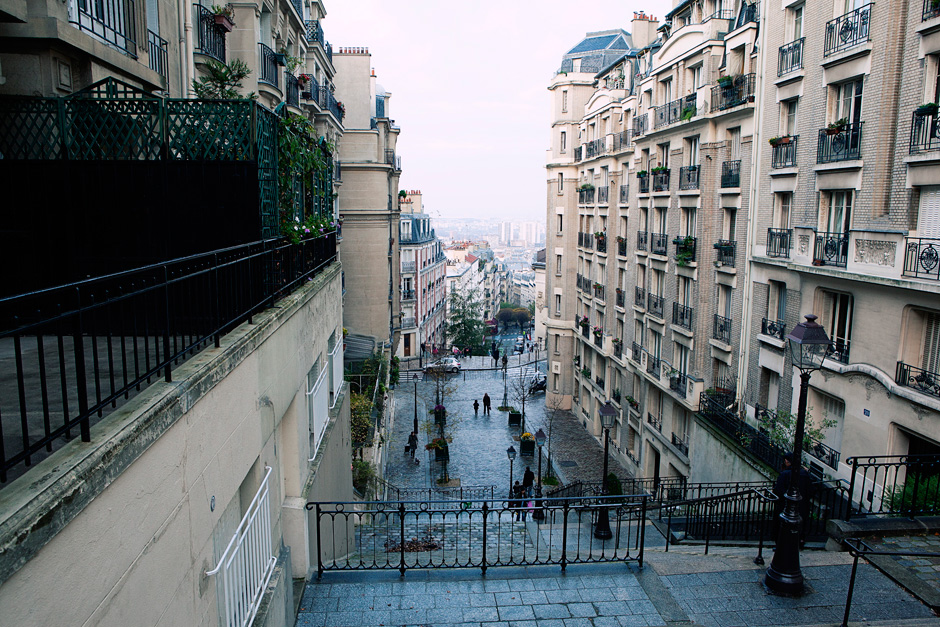 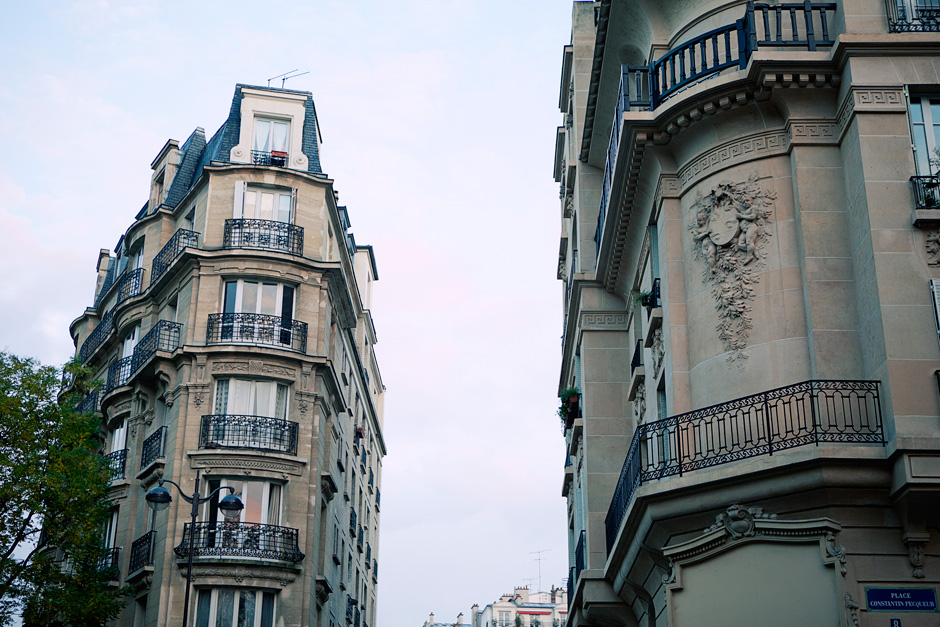 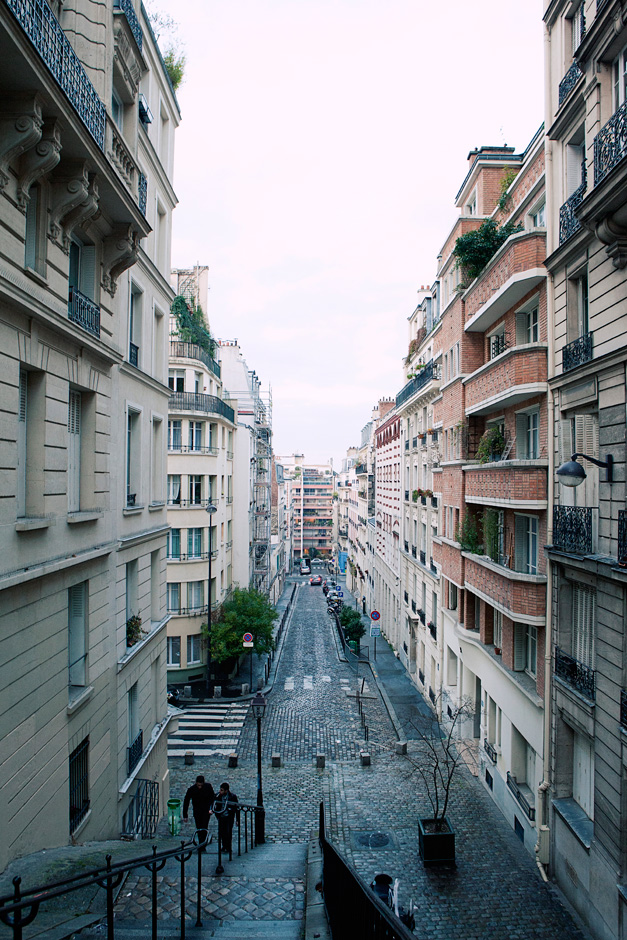 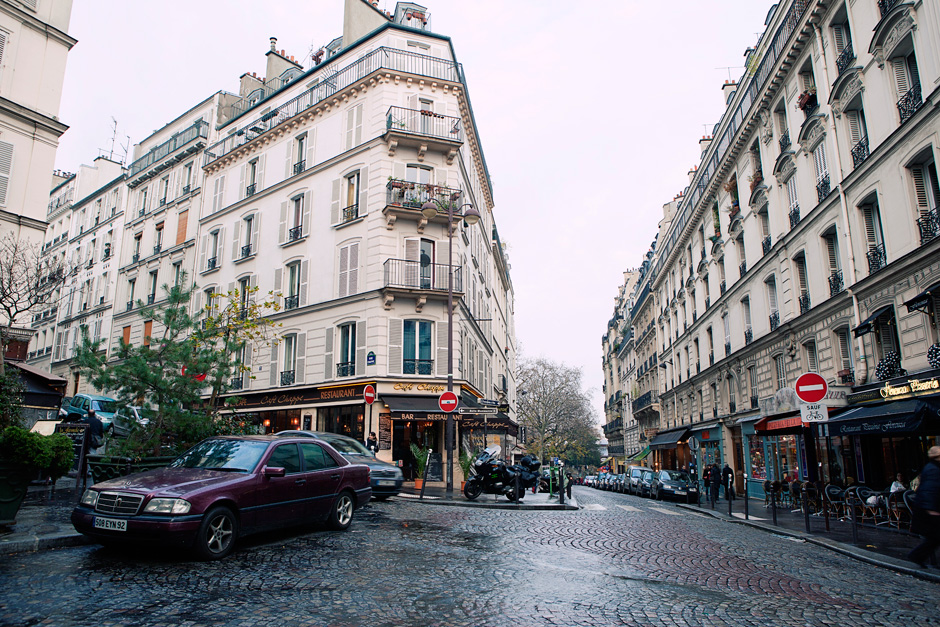 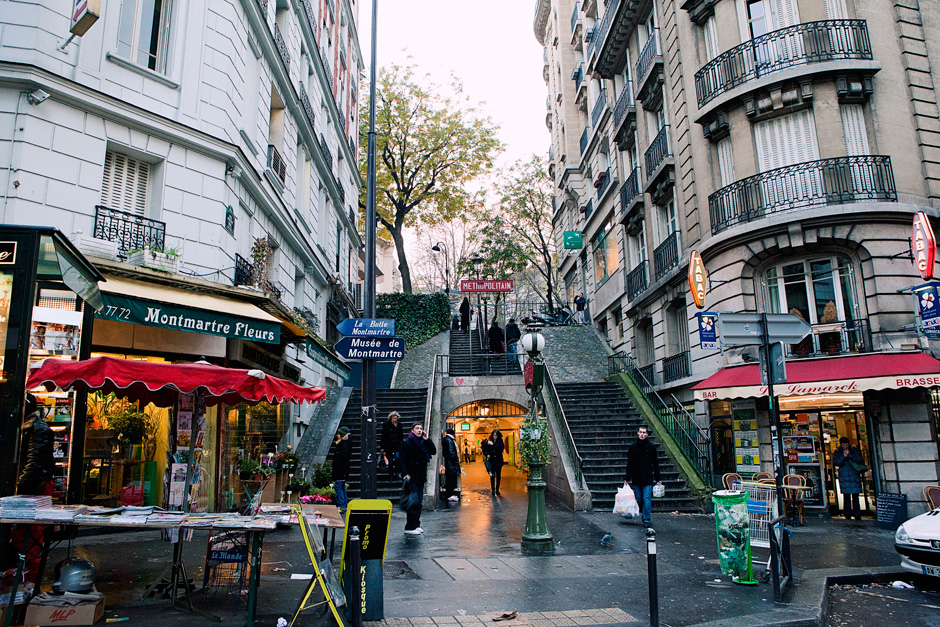 The entrance to a near­by metro sta­tion. I love how it’s hid­den in a stair­way, sand­wiched between two shops. 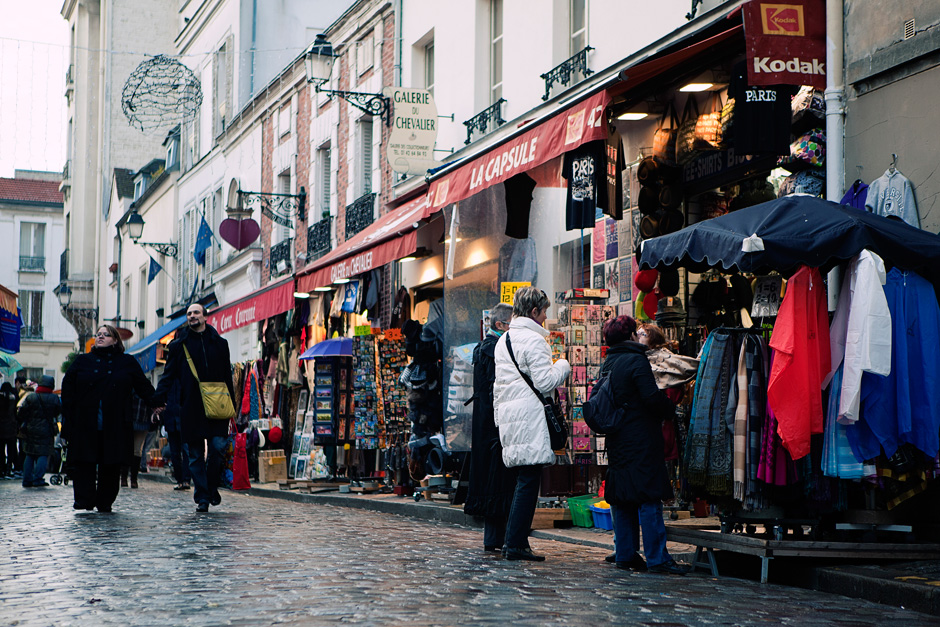 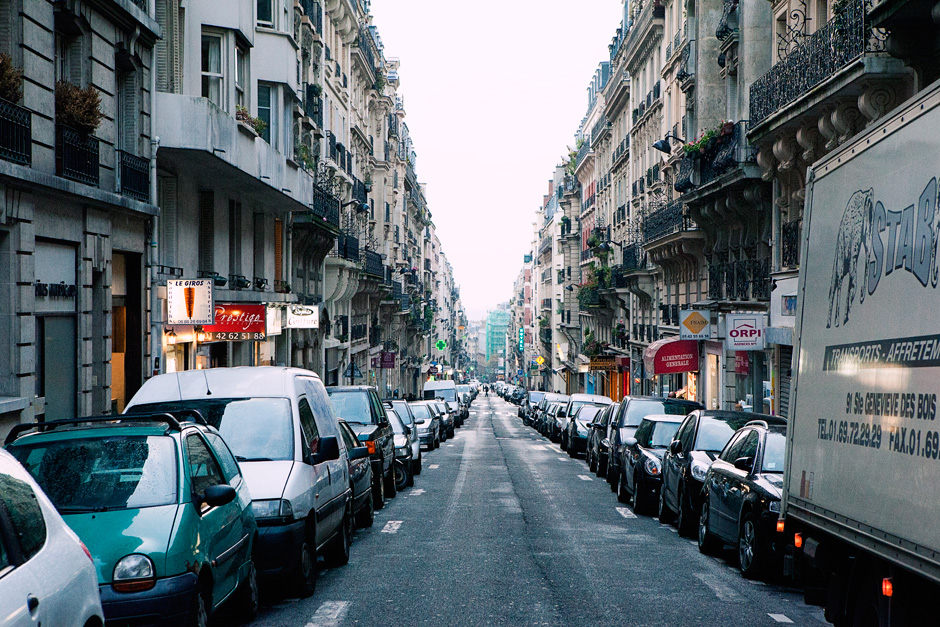 The Basilica is locat­ed at the high­est point in the city, and on a clear day, the view of Paris from the Basilica is sup­posed to be as good as the one on top of the Eiffel Tower.

There are two stair­cas­es, each lead­ing up to either side of the church, and each divid­ed in thirds. I noticed that there were three black men at the bot­tom of each break, but did­n’t think any­thing of it. As I made my way up one set, I was accost­ed by one of them, who put a hand on me to stop me from walk­ing up and said, “Don’t wor­ry”. I noticed he had three strings tied in a knot at top in his hands and he start­ed fidling with it. I shook my head, pre­tend­ing not to speak English, and he put his hand on my chest again, and repeat­ed, “Don’t wor­ry”. I pushed past him.

Later on I found out they were all scam artists. One of them in the group of three will quick­ly make a bracelet around your wrist if you stop, and then demand mon­ey for it, some­times up to 20 Euros. Some peo­ple have a hard time refus­ing since they take the fact that it’s already on your wrist as a sign that you bought it. The oth­er two guys make sure you pay. 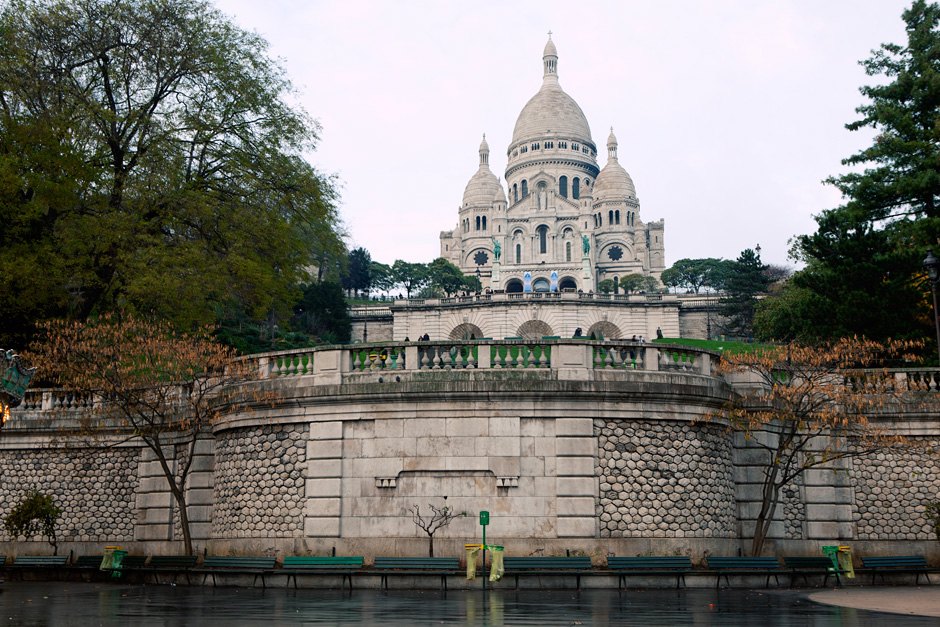 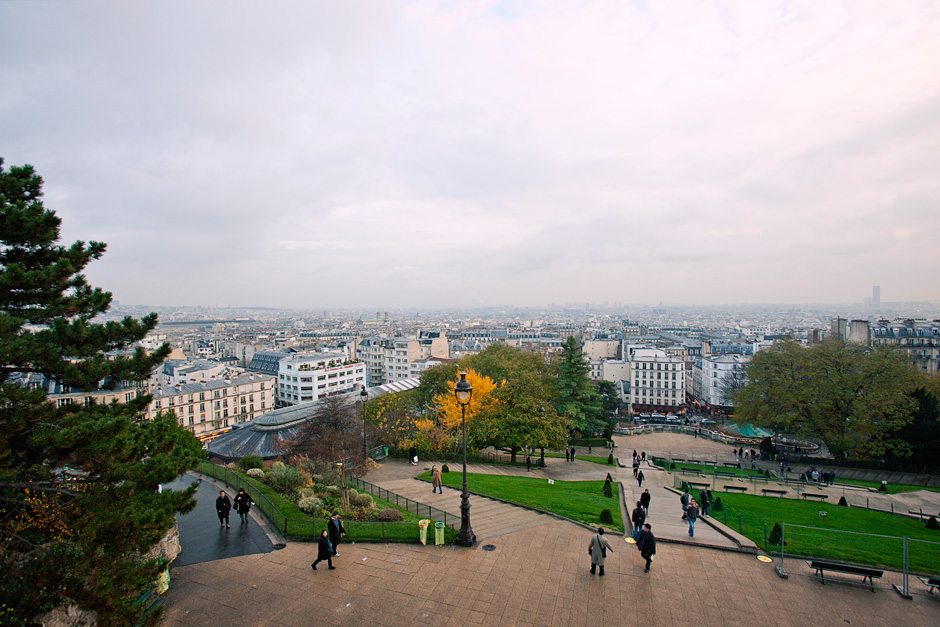 There are a few tele­scopes up here, cater­ing to your inner voyeur. A group of peo­ple who sound­ed Swedish were smok­ing a joint, which I found hilar­i­ous as there were pret­ty much right out­side a church. 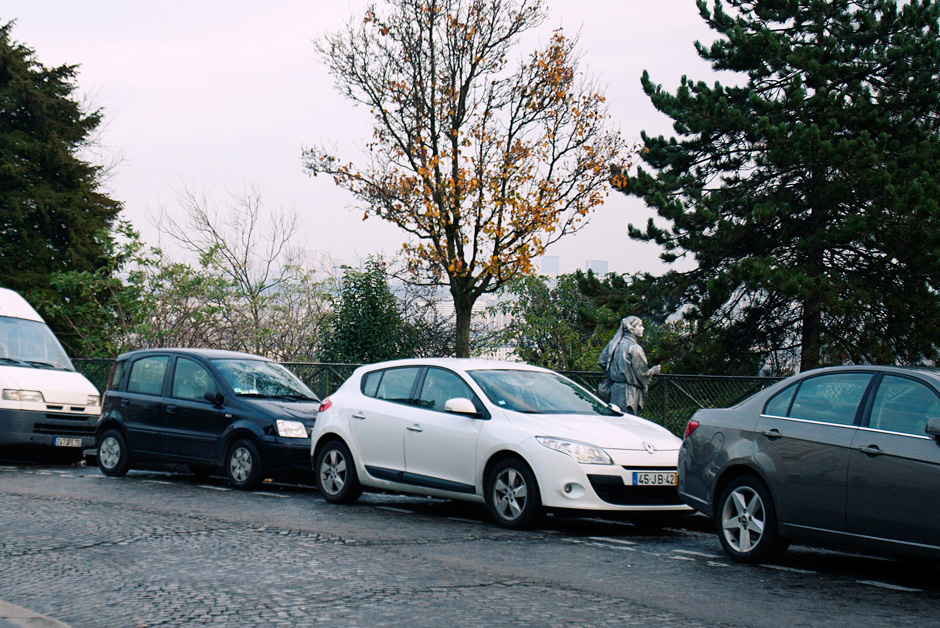 To set my feet on Rue Saint-Vincent and walk the cob­ble­stone as I lis­tened to this to this song has long been a dream of mine. It’s actu­al­ly a very short road, with not much in par­tic­u­lar in terms of scenery or land­marks. What’s great about Paris is that there are sto­ries every­where; peo­ple live and love and die on streets like any oth­er. 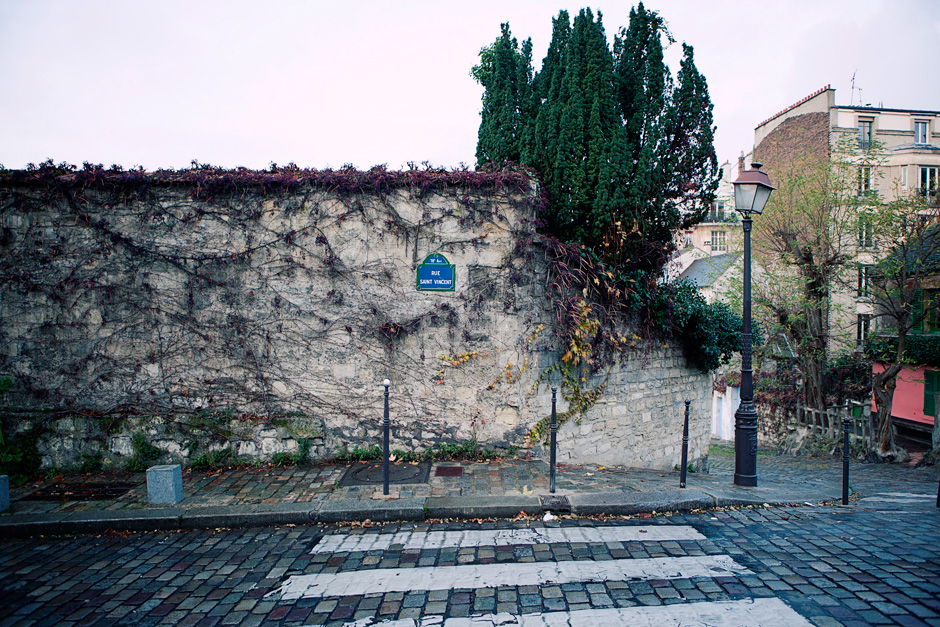 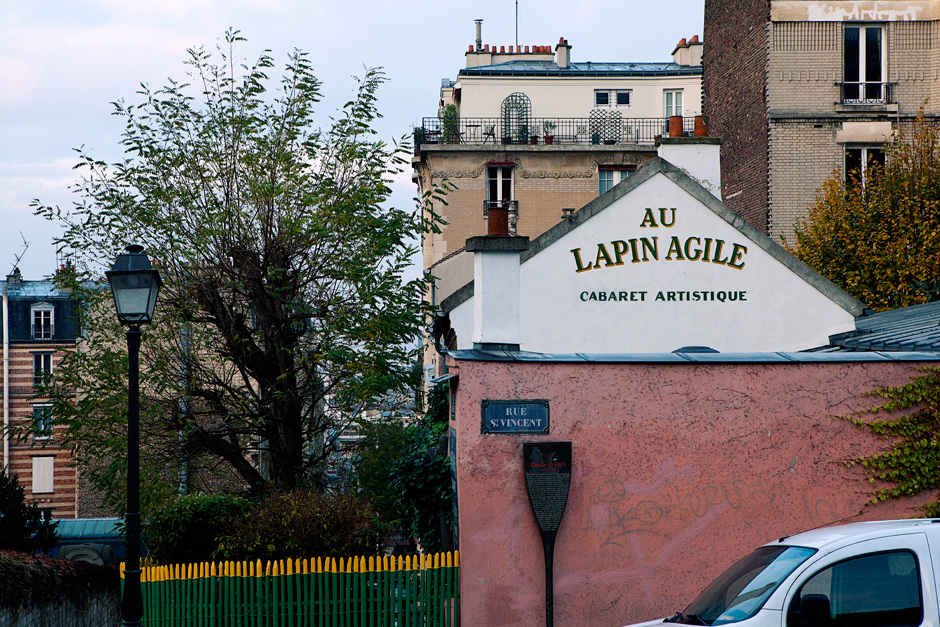 The Lapin Agile, a cabaret fre­quent­ed by many famous Parisian artists. Steve Martin wrote a hilar­i­ous play called Picasso at the Lapin Agile about an encounter he has with Einstein there. I’m hop­ing this will one day be made into a movie. 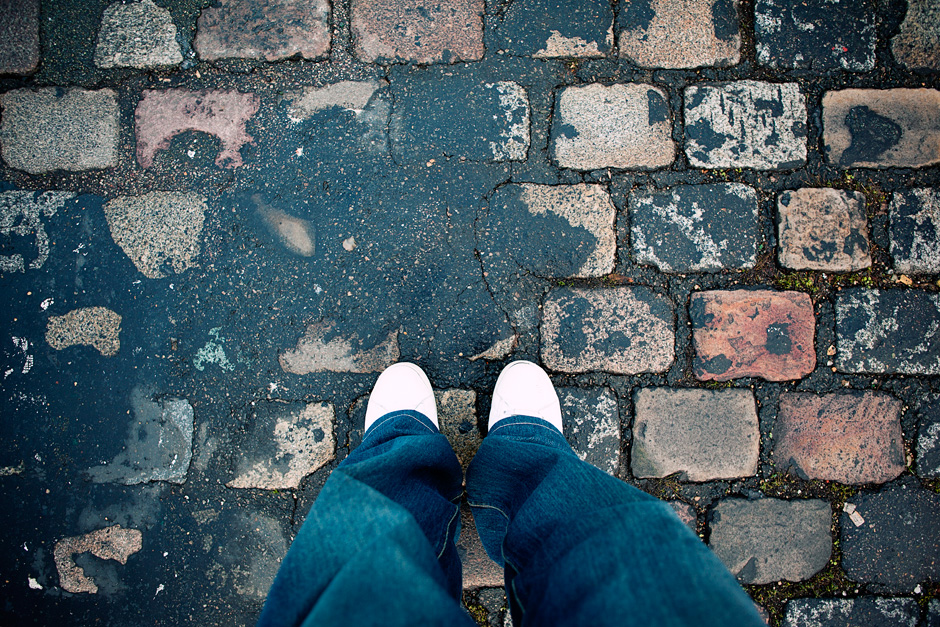