Mike ini­tial­ly told me I could stay with him for three days, because he soon had to trav­el to Scotland to film a doc­u­men­tary. Over the phone before I even arrived to meet him, how­ev­er, he sug­gest­ed that I come with him to Scotland to make it the trip of a life­time. I could­n’t say no; to see Scotland has always been a dream of mine. And see­ing as how we used the same pho­to equip­ment, I could give him a hand with his film while cut­ting my teeth on using a lot of gear I’ve yet to afford.

So we loaded up the Range Rover with a ridicu­lous amount of gear, and left by 6am just so we could make it there before too late and to record the tran­si­tion from sun­rise to night. swing­ing by to pick up Liverpool Liz as anoth­er cam­era oper­a­tor before leav­ing. Mike set up his 20D to take a pic­ture every 10 sec­onds, and we made this stop-motion video.

The jour­ney took 13 hours by car, straight up to the north-west coast of Scotland to small town called Ullapool, where his friend Jean-Marc lived, who was also a sub­ject in Mike’s per­son­al project. We made it as far as Inverness before the bat­ter­ies died, which is about 900km (and anoth­er 90km to Ullapool), and took about ten and a half hours. If you watch the GPS in the video, you get a fast-for­ward­ed view of our path through the rain and the Scottish moun­tains. 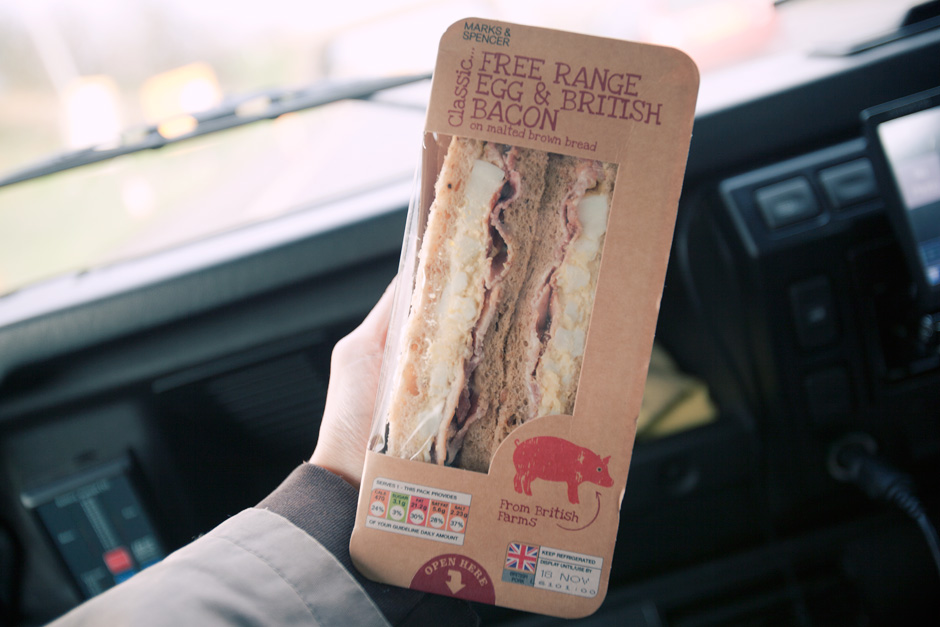 This was a pret­ty damn good sand­wich, from a Marks and Spencer road stop. They had a huge selec­tion of types too.