This is one of the strangest times of my life. I remem­ber feel­ing some­thing sim­i­lar to this over four years ago, but I haven’t had it since.

I’m fight­ing my old self again. Fighting against these feel­ings and past habits.

I wish I could define and explain it. Vincent Gallo has a song he titled “Glad To Be Unhappy”, filled his dis­tinct­ly min­i­mal­is­tic piano and acoustic gui­tar sounds, so sparse you don’t know where the down­beat falls. But there are no lyrics, and I think I’m start­ing to under­stand why.

Everything is so sim­ple when you’re set in your heart. But when you’re filled with such para­dox­i­cal, con­tra­dic­to­ry feel­ings, noth­ing makes any sense. The world is turned upside down.

It’s frus­trat­ing1 and beau­ti­ful all at once.

I think a part of me wants to think about it. I want to keep this feel­ing, where every song sounds as good as the first time you heard it, and the lead­en sky is urg­ing you for­ward with every step you take. To be so inspired. 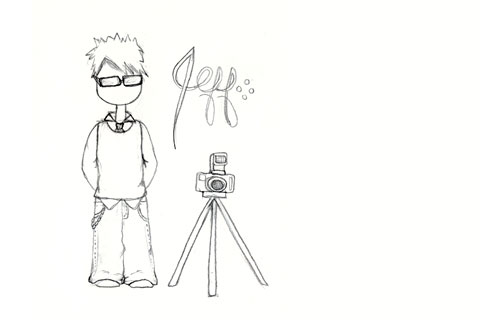 Julie drew this pic­ture of me. The details betray her per­spi­cac­i­ty.

Such as the way my shirt tails dan­gle insou­ciant­ly from the sweater. How the pant bot­toms are slight­ly bunched up. And while I don’t wear a tie that often, the prep­py top + skater bot­toms style is accu­rate. Even the length of chain and the shape of my glass­es. All the lit­tle details I think about when I dress myself. The only thing that isn’t me is the hair, which falls flat in the win­ter, due to the fact that it’s toque wear­ing sea­son.

Also, I have no eyes, nose or mouth is this pic­ture. Only my wide-arm glass­es, which I’ve said before is a large part of my iden­ti­ty. Obviously, her exclu­sion of my facial fea­tures has put even more empha­sis on this.

I won­der: why are my arms drawn behind my back? Posture says a lot about a per­son. Maybe this was done with­out any con­sid­er­a­tion, but maybe there was sub­con­scious intent.

It’s always inter­est­ing to find out how oth­er peo­ple see you. A self-image is often biased.

So which image is more accu­rate; yours or theirs?

At the core of our beings, Pat and I are the same per­son.

What sep­a­rates us is our emo­tion, or lack there­of. Pat’s the log­i­cal one, I’m the emo­tion­al one. I’ve always looked up to him — his strength, his morals, his per­son­al­i­ty — with­out real­ly under­stand­ing why.

It’s only in the last year that I’ve come to real­ize Pat is a Taoist. This comes with the real­iza­tion that I’m a Taoist myself, and explains why I try to be more like him.

The inter­est­ing part is that he does­n’t even know that he’s a Taoist — sort of like Winnie the Pooh — which is exact­ly what makes him a true Taoist.

One of Chuang Tzŭ’s para­bles illus­trates this point. In an abbre­vi­at­ed ver­sion, Knowledge seeks a con­scious reflec­tion to know the Tao, and asked Silent Do Nothing and Reckless Blurter, before ask­ing The Yellow Emperor (ahhh, the Romantic per­son­i­fi­ca­tion of Chinese fables):

Knowledge said to The Yellow Emperor, “I asked Silent Do Nothing and he kept qui­et. Not only did­n’t he answer me, but he did­n’t even know how to answer. I asked Reckless Blurter, and though he want­ed to tell me, he did­n’t, and even for­got my ques­tions. Now I’ve asked you, and you know all about it. Why do you say that you’re far from it?”.

It is sad but true that real skill comes from seem­ing­ly end­less drilling of the basics and then learn­ing how to transcend/forget most of what you have so patient­ly learned.

In oth­er words, learn­ing struc­ture is essen­tial to learn­ing to react to a com­plete lack of struc­ture (i.e. a real fight); but if you focus on struc­ture for too long it becomes counter-pro­duc­tive to “being with­out struc­ture” in mar­tial terms. One of the many annoy­ing para­dox­es in the inter­nal arts.

One of the many para­dox­es in the Taoist phi­los­o­phy as well. As much as I try to study it, learn it, and apply it, I find myself think­ing about it too much. As a result, I occa­sion­al­ly stray from being cen­tered, and lose my bal­ance.

It’s the con­scious reflec­tion which Knowledge is seek­ing that pre­emp­tive­ly dooms his search. This is my prob­lem as well. I buy Taoist books with a thirst for knowl­edge, but they’re all telling me the same thing now. Not that the books haven’t helped at all, but I feel like I’ve reached a lim­it. Perhaps even the sim­ple act of writ­ing about this is counter-pro­duc­tive.

I have the under­stand­ing, but I can’t apply it with­out think­ing about it first, and it’s the attempt to apply it that ruins the point. I’ve yet to reach a stage of pure reac­tion and spon­tane­ity, like Pat.

But I’m get­ting there. 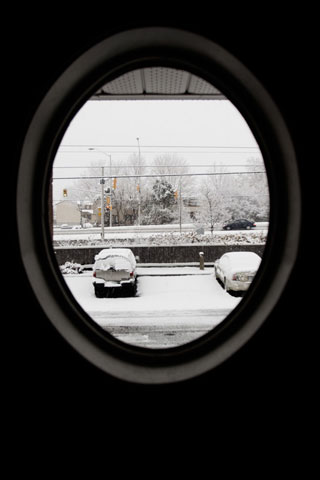 Turning over and over in the sky, length after length of white­ness unwound over the earth and shroud­ed it. The bliz­zard was alone in the world; it had no rival.

When he climbed down from the win­dow sill Yura’s first impulse was to dress, run out­side, and start doing some­thing.

When one looks out­side their win­dow and sees this, this blan­ket of puri­ty, what else can one feel but seren­i­ty, con­tent­ment, and hope?

I met with Frédéric, the own­er of the Salon, and after show­ing him a port­fo­lio of my pic­tures, he agreed to let me have an exhib­it in the next show in February.

As this was­n’t only his art gallery but his house as well, I offered to let him make the deci­sion after see­ing my com­plet­ed work. He told me there was no need, as he trust­ed me based on what he had seen in my port­fo­lio, which I felt was a very nice com­pli­ment.

As artists (and I use this in the loos­est sense of the word to describe myself), we’re very dif­fer­ent. I told him that I like to study pho­to­graph­ic tech­niques, espe­cial­ly in pho­tos that I like, and apply those tech­niques to what I want to express or show. When I look at a piece of visu­al art, I look at mean­ing and intent. When I cre­ate, I keep the same thing in mind. Frédéric, on the oth­er hand, is more of a gut-feel­ing type of artist. He does what he feels is right, and does­n’t wor­ry as much about the under­ly­ing mes­sage.

He asked if I was sin­gle, and I told him I was. “Good”, he said, “That’ll help you focus”. It made me think of a quote by Alexander Dumas:

Woman inspires us to great things, and pre­vents us from achiev­ing them.

I made a remark about how I’d have a forum to devel­op my ideas now, projects I nev­er pur­sued because I did­n’t have a way to get them to a wider audi­ence. He told me that I should­n’t wor­ry about an audi­ence, and gave me an exam­ple to demon­strate his point: if you cre­ate the most beau­ti­ful thing you’ve ever done and you keep it in your base­ment, it isn’t art because no one sees it1, but to get caught up in that dilem­ma, and to not cre­ate sim­ply because of that, is a tragedy.

Perhaps this will be my chance.