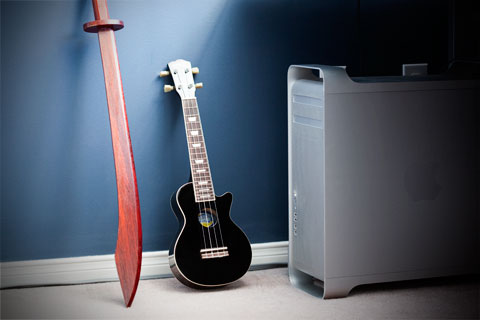 My Tai Chi teacher recent­ly added the Yang style broadsword to the cur­ricu­lum. I’d be lying if I said I was­n’t ecsta­t­ic, as I’ve wait­ed quite a while to learn a weapon form. There’s some­thing roman­tic and exot­ic about wield­ing one of the four great Chinese weapons. I find it delight­ful­ly iron­ic that it’s a gwei­lo who’s cat­alyzed such an inter­est in my own cul­ture. Take THAT, my racist and sex­ist Chinese ances­tors.

As for the ukulele, one day I found out how inex­pen­sive they can be and bought one right away. It’s a Mahalo Les Paul style ukulele (right down to the square tun­ing pegs) with an extend­ed neck for high­er reg­is­ter notes. In many ways, the ukulele is the per­fect instru­ment for me right now; cheap, easy enough that I can teach myself1, and not too hard on the fin­gers2.

It feels fuck­ing fan­tas­tic to be play­ing music in some form again. I did years of piano and flute lessons in ele­men­tary school to high school, and took a very long hia­tus from then till now. And that was most­ly in band, when I could­n’t choose the music I want­ed to play. Now I can play the songs I like, and the advan­tage is that I’ve prob­a­bly heard them a few hun­dred times so I already know them inside-out.

With my years of music lessons and per­for­mances from my youth, it’s not like I’m learn­ing music from scratch, I’m sim­ply fig­ur­ing out how to apply what I already know about tone, pos­ture, tun­ing, vol­ume, fin­ger­ing3, tim­ing, and into­na­tion, to anoth­er instru­ment. Admittedly, it’s been very slow going, and it’s like I’m learn­ing a new lan­guage as I train my fin­gers to achieve a dex­ter­i­ty that was nev­er there before.

The inter­est­ing thing is that my last few years prac­tic­ing Tai Chi has helped me learn the ukulele. In my Tai Chi class, I’ve gained the patience and per­se­ver­ance required to prac­tice the same moves over and over again until they become a nat­ur­al part of my mus­cle mem­o­ry. In the begin­ning, it was a lot of con­cen­tra­tion spent just try­ing to remem­ber what to do next in the form, but now that I don’t need to think about them when I prac­tice, my con­cen­tra­tion goes into fine-tun­ing the lit­tle details. The same prin­ci­ples can be applied to the ukulele (or any instru­ment, for that mat­ter), and I’m try­ing to get to the point where I don’t need to think about what my fin­gers should be doing, and just con­cen­trate on play­ing with the right kind of expres­sive­ness.

Which is why I have a broadsword and a ukulele rest­ing on the wall next to my desk. Any time I need a break, I pick up one of them and prac­tice for a few min­utes.

I’ve start­ed learn­ing large san shou in my Tai Chi class. While it’s fun to be prac­tic­ing anoth­er inter­ac­tive form of the Yang style, it’s also a lit­tle scary to be learn­ing some­thing new as my teacher nears retire­ment (when he reach­es 60 in four years). I’m start­ing to wor­ry that I won’t reach a lev­el where I can prac­tice effec­tive­ly on my own before his time is up.

A class­mate once told me that his com­ing retire­ment is a good thing. We’ll be forced to go else­where to expand our knowl­edge of Tai Chi, because we reach cer­tain lim­i­ta­tions when prac­tic­ing with the same part­ners, skill lev­els, part­ners, styles, body types, and even teach­ers. While I under­stand his rea­son­ing, it doesn’t change the fact that I may not be able to con­tin­ue learn­ing what I know now, if anoth­er teacher doesn’t offer the same cur­ricu­lum.

Added to this is the fact that mar­tial Tai Chi teach­ers are hard to find in a city as small as this. Good teach­ers, espe­cial­ly ones suit­ed to your learn­ing style, with the right bal­ance of patience and dis­ci­pline, are even less com­mon.

It makes me won­der where I’ll be with my Tai Chi progress in four years.

Knowing the con­sis­ten­cy with which I go, she asked me if I ever felt like not going to my Tai Chi class­es on Tuesday and Thursday nights.

I thought about it, and came to the real­iza­tion that I did­n’t. There have been win­ter nights where the com­bi­na­tion of snow­storm and ail­ing tran­sit sys­tem have sud­den­ly left me with a wel­come free night, but oth­er than that, I always enjoy going to class.

Before Tai Chi was table ten­nis1, and some days, I’d have to force myself to go. But when I was there, in the mid­dle of a good ral­ly, then pant­i­ng, sweat­ing, exhaust­ed after­ward, I’d always remind myself that I was glad I went.

Tai Chi offers me some­thing else though, a way for me to lose myself for an hour or two. Maybe because it takes so much focus, or so much focus to not focus on any­thing, that I’m able to for­get every­thing else. Even when I’m prac­tic­ing the form on my own it’s not the same. Being at the stu­dio with the oth­er stu­dents — learn­ing from and teach­ing each oth­er, apply­ing the prin­ci­ples we can’t prac­tice by our­selves — lets me get away. On top of that, I know that I’m improv­ing, even if I may not notice it in myself.

And that’s enough to make me look for­ward to my next class as soon as I step out of the stu­dio into the cool night air.

There’s a good mix of body types and skill lev­els in my Tai Chi class. As the most junior per­son in the group, I have the ben­e­fit of always work­ing with peo­ple who are bet­ter than me (although being able to teach some­one myself would cer­tain­ly help solid­i­fy the con­cepts in my head).

Nothing beats work­ing with the teacher, who can pre­cise­ly vary his skill lev­el so one can learn and absorb things in small incre­ments, a sys­tem­at­ic way of fine-tun­ing the details at a grad­ual pace. It’s some­thing that takes a great deal of time for bet­ter results in the long-run, and I’m sure that in this sense, he’s invest­ing in his stu­dents as much as one invests in the class.

Still, there are senior stu­dents who teach me sig­nif­i­cant things with­in a sin­gle minute of work­ing with them. They fill in the gaps in my knowl­edge that I’m not sure I’d be able to fig­ure out by myself, because they’ve been at my lev­el before and under­stand what I’m doing wrong. Add to this a propen­si­ty to teach and help, and every class I walk away feel­ing like I’m improv­ing, if only by a small amount. Sometimes it’s to the point where I feel like my mind is going to explode, and the coor­di­na­tion of my body needs to catch up with the con­cepts in my brain.

But there are also senior stu­dents who seem stiff and unco­op­er­a­tive to the point where I feel I don’t learn any­thing from them. And even though I’m told they’re being nice and not over­bear­ing, I find prac­tic­ing with them to be very dif­fi­cult. It’s as if they’re work­ing too far beyond my lev­el, where my struc­ture falls apart and I don’t know what I’m doing wrong. Maybe it just means I’m not skilled enough to adjust and do it right yet. I’m still thank­ful to be able to work with them though, because at the very least, they remind me that not every­one who’s going to attack you will be coop­er­a­tive.