When I made the deci­sion to jour­ney into this lifestyle, I knew that it was­n’t going to be easy, although I sus­pect­ed that it would be eas­i­er for me than for oth­er novice dom­i­nants, just from the fact that I have a very clear of idea of what I want in life and know myself well (or believe it at least).

The hard­est thing has been step­ping out­side of my com­fort zone, or what Warren describes as, “the psy­cho­log­i­cal bar­ri­ers to under­tak­ing such a polit­i­cal­ly incor­rect activ­i­ty.” It’s iron­ic; he warns, “…keep in mind that by admit­ting her desires, [the sub­mis­sive] could be seen to be reject­ing gains that women have slow­ly and painful­ly made over the last 20, 50, 100 years”, some­thing I under­stand com­plete­ly, but it’s not Loo who’s wor­ried about reject­ing these gains.

After all, as much as I hate to admit it, I’ve been pro­grammed by soci­ety to a cer­tain degree. No vio­lence against women, females are to be treat­ed as equals, et cetera. And along with this are my own pro­grammed morals and beliefs. Expect noth­ing from any­one. Punishment does more harm than good. The list goes on in var­ied and incon­sis­tent ways. What makes it all hard­er is the fact that break­ing out of the bub­ble must be done out of self-inter­est. As much as I’d like to keep remind­ing myself that this is not only what Louise wants, but needs in a rela­tion­ship, I have to for­go the rein­forc­ing of any such idea. To acknowl­edge it is to ruin the dynam­ic between Dom and sub.

Interestingly enough, the only way I’ve been able to get past these per­son­al bound­aries has been to not intel­lec­tu­al­ize them, to act with­out think­ing. To expect a woman to ask for per­mis­sion to leave my side, or come to bed. To have her sit at my feet instead of next to me. To hit her until the point of tears, but not stop. To know that her body is mine, and not her own.

To live this life for me, and not the both of us.

Know what I hate? No, fuck­ing hate.

I fuck­ing hate it when a girl reduces me, or any guy, for that mat­ter, to a sex. When some PETTY-MINDED FUCK gen­er­al­izes some­one as belong­ing to the group of “males” because of a few char­ac­ter­is­tics shared with the stereo­type. Or brush­es off any traits she sees as unpleas­ant as sim­ply being the fault of hav­ing both an X and a Y chro­mo­some.

What the fuck. I don’t place the blame on ‘being female’ when a girl hap­pens to be late get­ting ready to go out. Or when a girl ends up in the mid­dle of a geek talk, I don’t con­de­scend to her and say, “You would­n’t be inter­est­ed cause you’re a girl”. I under­stand that girls can be geeky, or pruri­ent, or cere­bral, the same way that guys can be inter­est­ed in ball­room danc­ing, or chaste, or emo­tion­al.

I don’t do guys nights or any shit like that cause I choose not to judge. I don’t auto­mat­i­cal­ly assume that a girl would­n’t under­stand what hap­pens when the guys are togeth­er. I’ve had girls at my LAN par­ties, I know girls who go to strip clubs. And I choose not to act or do any­thing dif­fer­ent­ly if my girl­friend isn’t around, cause I have noth­ing to hide. I don’t want to be fake with either her or my friends.

Not every male is a slave to some­one with breasts. Beer com­mer­cials are not an accu­rate rep­re­sen­ta­tion of the entire male pop­u­la­tion.

A few years ago, while we were still liv­ing togeth­er, Pita and I passed by a restau­rant called Social that was along the mar­ket. We looked in at the ele­gant, min­i­mal atmos­phere, the nice­ly dressed peo­ple, and the intri­cate dish­es that were being served to them. Looking at the menu post­ed out­side, and not­ing the lack of dec­i­mals in the pric­ing (every­thing was in flat dol­lars), it was mutu­al­ly agreed that going there to dine with­out a rea­son to cel­e­brate was out of our bud­get. Just walk­ing inside was some­thing that we would have to earn, and we made an agree­ment. For the term, if I could man­age all As (any­thing from an A- to an A+, or a GPA of over 8.0) and if he could win his next com­pe­ti­tion (for both stan­dard and Latin ball­room danc­ing) than we would walk in one day and order any­thing we want­ed.

The term came and passed, and in the end I only man­aged a bunch of measly grades, while he got bronze at the com­pe­ti­tion. We nev­er spoke of it again.

Until this week. After trav­el­ing abroad for more than a year and work­ing in his native coun­try, Pita came back to Canada to set­tle down. He decid­ed to live the rest of his life in Montreal, but he was able to vis­it for the week­end. We agreed on lunch at Social, not need­ing any jus­ti­fi­ca­tion between each oth­er. After all, we grad­u­at­ed, found jobs, start­ed to set­tle down. We had­n’t seen each oth­er in over a year.

He had the duck, I had the lamb. Both were unbe­liev­ably suc­cu­lent, ten­der, and came with fresh sal­ads in a light dress­ing, along with super-thin fries. Even though we weren’t dressed as well as what some would call the “reg­u­lar” patrons, we were served well and with respect, some­thing can’t be said about all the restau­rants I’ve been to. To be hon­est, I’ve nev­er been giv­en a choice of water (reg­u­lar, min­er­al, soda, or sparkling, the man told us). I paid this time, and Pita agreed to treat me when I vis­it him in Montreal. 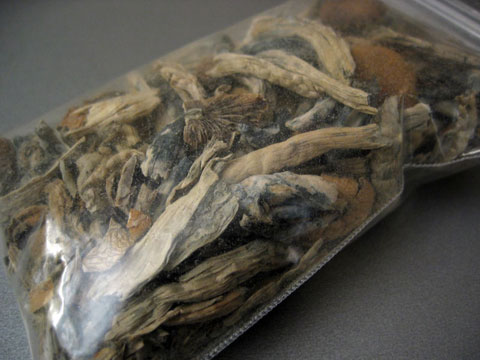 The half ounce. Financed by one, shared by many.

I have to say more about DFA 1979’s debut LP. I’m amazed that two young guys from Canada could come up with an album that’s as funky, loud, raw, and devel­oped as this. They aren’t the White Stripes, as some have trag­i­cal­ly com­pared. What’s the dif­fer­ence? DFA 1979 does­n’t have shit­ty vocals, shit­ty drums, or shit­ty songs (although they also don’t have a mod­er­ate­ly cute female drum­mer). THEY DON’T EVEN PLAY THE SAME INSTRUMENTS. A BASS IS NOT THE SAME AS A GUITAR YOU FUCKING IDIOTS. WHAT THE HELL WAS YOUR BASIS OF COMPARISON? THE NUMBER OF MEMBERS IN THE BAND? LET’S JUST COMPARE NIRVANA TO THE BRAD MEHLDAU TRIO CAUSE THEY BOTH HAVE THREE MEMBERS.

Listening to Romantic Rights can make any­one feel like a mil­lion bucks just walk­ing down the street. I know I do.