It’s the first day we haven’t talked, some­thing nei­ther of us expect­ed until some time next month. I think an ounce of Jäger will serve as com­pa­ny instead, and maybe a diges­tif for the healthy salmon (who must have swam 100000km before being caught) that was thanked for din­ner. It burns the stom­ach and the throat, but does­n’t keep me warm.

Sometimes, she teas­es by call­ing me Jealous Jeffrey. It’s like­ly she’s gone to bed cause she has to get up ear­ly tomor­row, fall­en asleep after a pil­sner she grabbed from work. But the mind wan­ders, and I think of her at a Sigma Nu par­ty, being hit on by some frat boy with a popped col­lar and a striped wrist­band around his fore­arm.

I nev­er wor­ry though, not cause I know she’s mine, but because she does.

(+5 bonus points if you get the album ref­er­ence.) 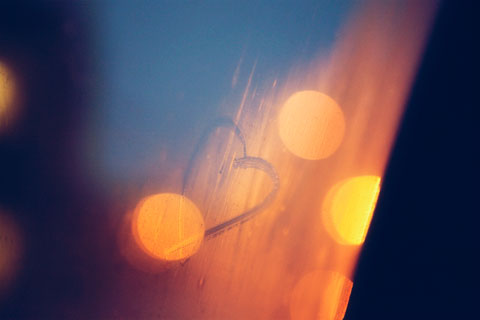 I real­ly do have love to give! I just don’t know where to put it!

This is the same part of me that notices the faint out­lines of hearts drawn in car win­dows. Also, the same part that mar­vels about that ado­les­cent point in life, when one would draw some­thing so sim­ple and insignif­i­cant because the only wor­ry was whether or not some­one liked you back.

So when I don’t have some­one to love, it fuck­ing kills me.

Sometimes, my sar­cas­tic humour is so dry and sub­tle that peo­ple who don’t know me very well think I’m being seri­ous. I try to say things that are so ridicu­lous they can only be tak­en as a joke, but it does­n’t always work. Example:

Yesterday, Jairus made pulled pork sand­wich­es (took him 8 hours!) that smelled soooo good they made me hun­gry, even though I had just eat­en a huge din­ner. As we were watch­ing A Jihad For Love (about the coex­is­tence of homo­sex­u­al­i­ty and Islam), Jesse said, “Too bad these Muslims would­n’t be able to enjoy this deli­cious pulled pork sand­wich”. I said, “Oh, cause it’s pulled”, in a tone like I had just real­ized some­thing, but what I thought was a jok­ing man­ner. Everyone turned their heads at me, Ian said, “Cause it’s pork, yeah”, and he lin­gered on that yeah real­ly slow­ly, like he was embar­rassed for me, then every­one turned back to the TV. I’m pret­ty sure they all think I’m an idiot now, and that I thought Muslims have some­thing against ani­mals when they’re slow-cooked in vine­gar sauce.

There’s this thing, this sex­u­al thing I like. I mean real­ly like. It’s not exact­ly deviant, but cer­tain­ly some­thing that some girls may find gross or unap­peal­ing.

Even though it’s such a big deal to me, I nev­er told any of my girl­friends about it. Only one of them liked it, and even she did­n’t know how impor­tant it was to me, because it was some­thing she want­ed from me.

I know most of my girl­friends would have prob­a­bly indulged me (at least once in a while) if I told them, but I nev­er did. Not because it’s embar­rass­ing, but because I nev­er want­ed any of them to feel oblig­ed or pres­sured into doing it. I always think that one day, I’ll tell the right per­son because she’ll ask me what I like, and she’ll do it for me because she loves me. None of them have, yet, maybe because it’s nev­er got­ten bor­ing in the bed­room.

So for now, it remains this lit­tle secret I keep, because secrets aren’t so bad. They can be lit­tle gems that bring peo­ple clos­er togeth­er. So why reveal them all so soon?

It’s hard for me to hang out with peo­ple with same bad habits as I have (or have had).

I always try to improve and refuse to accept these things in myself, so it’s hard for me to accept them in oth­ers. I’m also afraid that spend­ing too much time with them would make me com­pla­cent, as I’d start to believe that these things are accept­able because oth­er peo­ple are okay with it.

That’s why I sur­round myself with peo­ple who are bet­ter than me.