Serenity has­n’t been some­thing that lasts for me. It comes and goes in cycles. Eventually, I fall off the path, because anger, impa­tience, love, over-ana­lyz­ing, are all habits of mine. Habits that resur­face when I let my guard down.

The goal now is to keep the seren­i­ty going. The hard­est part is the fact that I have to be con­scious in my attempt. It’s a con­stant work in progress, and some­thing I can’t stop work­ing on, lest I fall into the trap of my old self again. I’m hop­ing that even­tu­al­ly, I’ll be able to make this into a good habit, and this peace will come on its own.

So often, it’s hope that gets me through. But I have no need of hope, or clo­sure, or jus­tice any­more. None of that mat­ters. Life is what it is. I’m start­ing to let go of every­thing I used to hold dear. 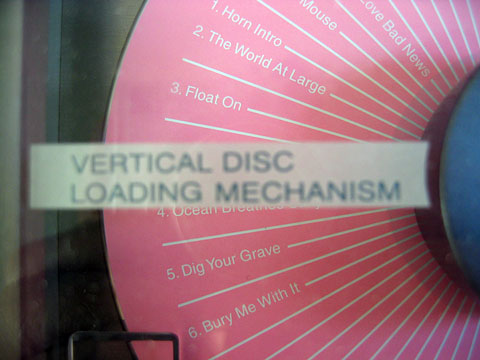 Modest Mouse used to be the best kept indie rock secret. Then they let Gravity Rides Everything be used in a Nissan com­mer­cial. Then they did Saturday Night Live. Then they did The O.C. (Really, Modest Mouse? REALLY?). Then they appeared on Rock Band 2 and Guitar Hero World Tour, and now I won­der if they were just sell­outs doing it for the mon­ey to begin with.

This was the song of 2004. It defined the year for me. I was pick­ing myself up off the floor after a tor­rid rela­tion­ship, and set­tling down alone, find­ing my own lit­tle bit of peace.

That was six years ago, and I’m back there again. I had an odd moment of seren­i­ty as I left the stair­case to the Tai Chi stu­dio tonight, and walked into the frigid, calm air. Sort of like I had no hope, but that did­n’t mat­ter because I did­n’t need hope; I had my hands, my sens­es, my wits, and my cam­era, and that was good enough.

I’m sure the fact that I’ve start­ing work­ing from home four days out of the week has some­thing to do with it. I can work on projects with my music loud, and my pjs on. I don’t get inter­rupt­ed, so my pro­duc­tiv­i­ty is great.

Okay, so I’ve been avoid­ing any movies or TV shows with dat­ing or romance. I’m stick­ing strict­ly to Babylon 5 and The Sopranos. It’s been work­ing, because I’ve been feel­ing bet­ter about myself and my cur­rent sit­u­a­tion. Thinking: “Maybe I’m a nice secret right now”.

I’ve come to under­stand the mind­sets of a few dif­fer­ent types of peo­ple when it comes to per­son­al prob­lems. Most peo­ple I know will sim­ply deal with any prob­lems, instead of fight­ing them head on. I find that I try to do the same thing some­times, but I tend to come out a lit­tle worse for wear. Most have prob­a­bly gained more seren­i­ty, some­thing that I’m still learn­ing to con­trol.

Yet when most peo­ple are deal­ing with their issues in a pas­sive man­ner, the meth­ods become even more diverse. Justification seems to be a very com­mon method, but many jus­ti­fy in dif­fer­ent ways.

Some that I know believe that life is sim­ply full of dis­ap­point­ments (a few Buddhist can­di­dates, I’m sure) and that any bad things that come their way should sim­ply be under­stood. They don’t get angry or upset, and they seem to come out on top of things in the end. Others try to ignore the prob­lems, since think­ing about them will only make things worse. Some that I know even use such bad sit­u­a­tions to their advan­tage by exag­ger­at­ing them for some cheap atten­tion. I even know oth­ers who are able to feel bet­ter by com­par­ing them­selves to oth­ers.

Some will sim­ply get depressed.

I find that I gen­er­al­ly fall in either the for­mer or the lat­ter cat­e­gories. I would hope so at least, since I’ve been in the lat­ter for a great part of my life. I’ve been able to deal with things a lit­tle bit bet­ter now, for about three years. I sup­pose that it’s some­thing that Rob was able to teach me, but prob­a­bly also due to the fact that I’ve had a good last three years. I’ve been able to see the oth­er side of life that so many oth­ers seem to be able to expe­ri­ence. I feel like I’ve only got­ten a taste, and that I should try to expe­ri­ence it again.

But God still owes me some seren­i­ty.