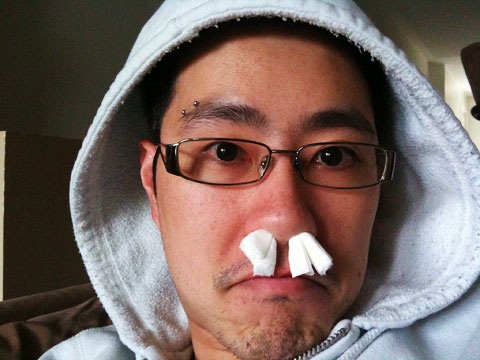 END_OF_DOCUMENT_TOKEN_TO_BE_REPLACED

One of the drugs I’ve been pre­scribed for my col­i­tis, Asacol, is delay-released, which means it has a spe­cial coat­ing that makes it trav­el through the stom­ach, and absorbed only in the colon. This spe­cif­ic brand is released in the left and end of the colon, which is where my col­i­tis is. I often get con­flict­ing advice about how to take the drug:

It’s gen­er­al­ly tak­en that the doc­tor’s advice takes prece­dence over any­thing else. But as a per­son who works in the med­ical indus­try, where doc­tors are fre­quent­ly revealed to be incom­pe­tent, I know that not all of them know what they’re talk­ing about.

Scary, for an indus­try in which we put so much blind faith. Who am I sup­posed to believe?

The doc­tor told us she has anoth­er 5–6 months. Her colon is so enlarged from the tumor that it’s thick­er than her spine, and the pro­ce­dure was just a tem­po­rary solu­tion to pre­vent fur­ther block­ages.

How strange it is to “know” how much time there is left. I guess that’s why they call it a dead­line. I had already assumed that this would going to be the last time I could see her, but that won’t make it any eas­i­er when I have to leave.

I’m grate­ful to the peo­ple who have been send­ing me their regards. It’s a nice com­fort. One of the best pieces of advice came from Charlotte, who told me to “not leave any­thing at all unsaid to her…leave no ques­tions unan­swered, and to not with­hold any affec­tion you feel for her”.

I had come to Hong Kong with the inten­tion of telling my grand­ma how impor­tant she was to me. Finding the right words in Chinese to express exact­ly what I want­ed to say.

But try­ing to speak with her has made me real­ize that she does­n’t care about any of that. She’s a very prac­ti­cal woman, almost to the point of tact­less­ness. For almost her entire life, mar­ried at 14 and as a sin­gle par­ent of sev­en kids, she’s had no time for words or feel­ings.

I’m here, and that’s how she under­stands how I feel.

Grandma’s at the hos­pi­tal. She woke up this morn­ing with pain all over her body, but more severe­ly in her low­er abdomen. They quick­ly drove her to the doc­tor, and it turns out there’s been a block­age in her colon. This after­noon they per­formed a pro­ce­dure to expand the colon, and it went through with­out any com­pli­ca­tions. She’s rest­ing at the hos­pi­tal for the night, and my fam­i­ly is tak­ing shifts to stay with her.

I’ve been stuck at home all day. Everyone else has been at the hos­pi­tal and they decid­ed to leave me behind. I’m on immune sup­press­ing med­ica­tions and the hos­pi­tal is full of germs; get­ting sick myself is the last thing I need, espe­cial­ly when it means that I would­n’t be able to see my grand­ma, as her immune sys­tem is even low­er than mine right now. I would only be in the way if I was there any­way.

I’m scared. I’ve nev­er dealt with any kind of sick­ness like this before. The only peo­ple in my fam­i­ly who have passed away were always far away in Hong Kong.

The can­cer has spread to her bones and sev­er­al major organs now. We asked the doc­tor not to tell her, but we can’t do any­thing against his moral oblig­a­tion to inform the patient. Either way, she does­n’t know how seri­ous it is, whether it’s from shock and denial, or mem­o­ry loss.

But she’s awake, and aware, and feel­ing no pain, which is good enough for me. The most we can do now is to try to make the rest of her life as enjoy­able as pos­si­ble.

She thinks she’s going to be fine. Keeps telling me that she’ll take me to a near­by park when she’s bet­ter. As much as it hurts me to know this won’t be pos­si­ble any­more, it’s reliev­ing to know she’s so obliv­i­ous. We don’t let our­selves cry around her, for fear that she may real­ize how bad it is.

Her face is more sal­low, her fin­gers and legs ema­ci­at­ed, but she still has her thick, black hair1. Aside from a dis­tend­ed stom­ach, it’s hard to tell that she has such a grim prog­no­sis.

But by far the hard­est part is hav­ing to cod­dle her like a child to take her med­ica­tion. Telling her she’s a good girl if she swal­lows her pills and reward­ing her with ice-cream. That we’re only strict because we care about her. It tears me in half when she gives such a painful look of dis­taste with every pill we hand her, 18 a day.

She used to be so strong. Now we have to be strong for her.