Another Christmas with Shirley and her fam­i­ly, although this time Bill’s fam­i­ly came down as well. I spent Christmas Eve night and Christmas day at their house, par­tak­ing in the Christmas expe­ri­ence with those who believe in the impor­tance of such a rit­u­al. 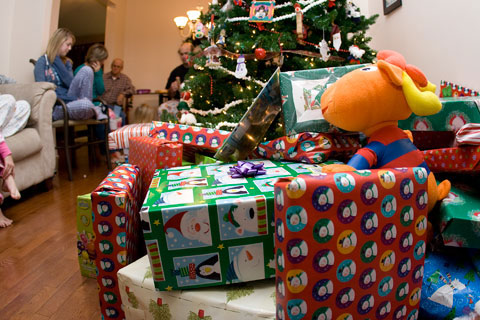 We were wrap­ping presents (from “Santa”) until mid­night on Christmas Eve. The tree must have been raised the two feet off the ground to fit every­thing under­neath. Negotiations went on through the night as to what time to wake up, but the kids woke us up at 6:30 any­way. Looking back on the pic­tures of 2005, you can tell how much they’ve grown in just two years.

Loads more pic­tures behind the cut.

I got some­thing from Shirley, and even her par­ents, which was total­ly unex­pect­ed because I had nev­er even met them before. “You spoil me”, I said, but they would­n’t con­cede me the point.

I don’t have any Christmas dec­o­ra­tions because I don’t cel­e­brate, myself. There’s a cer­tain imprac­ti­cal­i­ty to them. Something you only bring out once a year.

Christmas din­ners are dif­fer­ent from what I used to have as a child. The big meal would be a roast pig. Turkey isn’t a tra­di­tion­al Chinese food.

Most of the time was spent laz­ing around, tak­ing it easy, appre­ci­at­ing the hol­i­days as a break from the every day grind. The old­er kids don’t believe in Santa Claus any­more, but it does­n’t mat­ter. It does noth­ing to rob any­one of the Christmas spir­it.

At no point did I feel like a guest; there was no stand­ing on cer­e­mo­ny, and that’s what made me feel most like I was part of a fam­i­ly.

Something I get to expe­ri­ence if but once a year.