When I was young, my dad had a fight with his broth­er over open­ing a con­ve­nience store next to a phar­ma­cy (my uncle is a phar­ma­cist) in a plaza that my grand­moth­er owned. Both types of stores have lots of com­pet­ing prod­ucts, so the argu­ment was about who would be the one to open their store. I guess my dad won, because he bought the con­ve­nience store and ran it for quite a few years.

After that, I did­n’t see my uncle or his fam­i­ly at all. For so long that I com­plete­ly for­got that I had a cousin, Crystal.

When my grand­moth­er came from Hong Kong to vis­it one year, she reunit­ed the fam­i­lies again, and I saw them for the first time in a long while1.

At that time, the pop­u­lar thing to do was play cards. I had the rep­u­ta­tion as being the fastest, most dex­ter­ous deal­er out of all the kids. But when I went over to my uncle’s house one day and we were play­ing Asshole, I noticed Crystal deal­ing exact­ly the same way I did, except faster, with­out even pay­ing atten­tion.

It was at that point that I real­ized, “This per­son is my fam­i­ly”.

The only oth­er time I had such a stark real­iza­tion was dur­ing my trip to Hong Kong ear­li­er this year. At an inter­na­tion­al buf­fet, we grabbed some dessert from the cart and ordered some tea. My uncle, aunt (both sib­lings of my dad), and I were sit­ting at the table, with deli­cious pas­tries in front of us, but none of us were touch­ing them. When some­one asked my uncle why he was­n’t eat­ing his dessert yet, he said that he has to have tea with his sweets. And it turns out that was the exact same rea­son me and my aunt were wait­ing too. One of these lit­tle quirks that one nev­er expects some­one else to have, and some­times we’re even ridiculed for it, and yet here we were, three peo­ple doing the exact same thing for the exact same rea­son.

I gen­er­al­ly believe that humans are more like­ly a prod­uct of their expe­ri­ences, with a touch of inher­it­ed qual­i­ties too. After all, I’m almost noth­ing like either of my par­ents. It was only these two expe­ri­ences that made me admit that there’s a lit­tle more of us that’s inher­it­ed, that we’re a prod­uct of our genes, than I would have believed.

(I’ve been writ­ing this in my head for four years. Four years and sev­en months, to be pre­cise.)

So one last touch and then you’ll go
And we’ll pre­tend that it meant some­thing so much more
But it was vile, and it was cheap
And you are beau­ti­ful but you don’t mean a thing to me 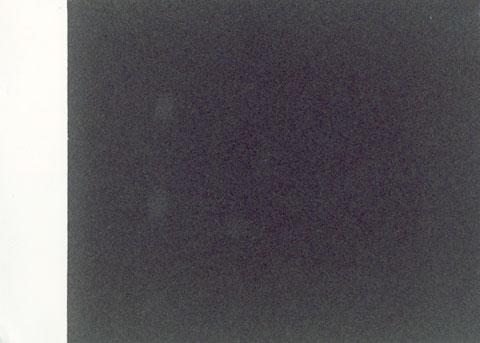 For some rea­son, I see it prop­er­ly like this — land­scape ori­en­ta­tion, with the white stripe on the left — when it could just as well be rotat­ed any oth­er way. This is the bias I place on it. The way I view it.

It almost looks like a room with a wall in frame on the left, and the cam­era has metered for a flash off the wall, under­ex­pos­ing the rest of the pic­ture. There are two smears in the black­ness. Maybe an out-of-focus object, maybe a fin­ger­print on the lens.

I did­n’t take the pic­ture. Someone else did, thought it was bad, and was about to throw it out before I asked for it. Someone who took me for grant­ed. Someone who’s world I lived in but for a week, in the midst of the intense sum­mer humid­i­ty and coitus inter­rup­tus.

I’ve kept it in one of my note­books since. The edges have turned yel­low, and the cor­ners blunt from han­dling.

Every time I look at it, I like to think that I see some­thing in that grain and that noise. That some­thing’s there; I just don’t see it because there isn’t enough light to expose it, but it exists nonethe­less. Some pho­to­graph­ic kōan, where I become that which I seek.

But I know there isn’t, the way I know it was noth­ing more than pass­ing moment, a week for­got­ten, a life unchanged.

And I’ve been hap­pi­ly fool­ing myself ever since.

Every now and then, Louise let’s me know that she’s pray­ing for me. For my health. For my suc­cess.

She real­ly believes in the pow­er of prayer. It’s healed her fam­i­ly, it’s giv­en her guid­ance, it’s pro­vid­ed her with the strength that she needs. She’s one of the few Christian’s whose faith I respect1.

It’s a nice feel­ing to be in some­one’s prayers, and she does this even though I’m not Christian myself.

Normally, I’m a skep­tic about these things.

Which makes it dif­fi­cult to deny how it’s late­ly been work­ing.

I sup­pose I should­n’t be sur­prised to find out you’ll be in town the day after I write about you.

The way the young man I just met is tak­ing the same bus home with me. The way the friend who’s been lost for­ev­er sud­den­ly shows up, pack­ing your bags in the check­out line.

But I know it’s not a sign. It’s not some cos­mic path, just the way things are work­ing out. At least, I think so. My life has been filled with such occur­rences, and I’ll be damned if it all does­n’t start to mean some­thing.

I dab­bled in Existentialism (after read­ing Huis Clos, revis­it­ing it when read­ing Thus Spoke Zarathustra), athe­ism (when I was dat­ing an Anglican), agnos­ti­cism (after we broke up), Nihilism (while read­ing sev­er­al books of Russian Romantic lit­er­a­ture), Buddhism (in ear­ly uni­ver­si­ty), and Christianity (through­out my life). None of it ever felt com­plete.

In 2003, I hap­pened to come across a few vers­es of the Tao Te Ching. The con­cepts were dif­fi­cult to grasp at first1. Eventually, with the guid­ance of some Chinese elders, I came to a sol­id foun­da­tion of under­stand­ing, then approached it slow­ly and care­ful­ly. I had put so much hope in find­ing a sys­tem of beliefs in the past, that I was scared of hur­ried­ly align­ing myself with the first one that bared a pass­ing resem­blance to my own.

More specif­i­cal­ly, I’m a philo­soph­i­cal Taoist. I don’t believe in any poly­the­is­tic aspects of the reli­gious side, the div­ina­tion of the I Ching, or any of the archa­ic sex­u­al prac­tices of ret­ro­grade ejac­u­la­tion and the like.

This does­n’t mean that I’m a per­fect Taoist, inso­far as there are no per­fect Christians, or per­fect peo­ple. The Tao Te Ching is my bible. It guides me on how to live and behave as much as it is a label of my exist­ing beliefs. There are things I have yet to learn, apply, or both.

I think I’ve always been a Taoist. I just nev­er knew it. For as long as I can remem­ber, I’ve lived by the prin­ci­ples of bal­ance, empti­ness (or recep­tive­ness), and strength of flex­i­bil­i­ty. I’m glad that it’s a part of the cul­ture of my blood. It makes me proud. Understanding Cantonese has cer­tain­ly helped me appre­ci­ate the beau­ty of it all.

One does­n’t decide to become a Taoist. The Way is described as hav­ing no begin­ning or end. You must become one with it.

As such, a trav­el­er is at his des­ti­na­tion at every part of the jour­ney.