I’ve been decon­struct­ing songs, try­ing to fig­ure out what mag­i­cal com­bi­na­tion of pitch­es and tim­bres and rhythms can cre­ate such an intense response in my body. Every song is a puz­zle when you try to fit the com­po­si­tion into what a per­son can do with­out stu­dio edit­ing or a band.

On my quest to unlock such a puz­zle, I dis­cov­ered Final Fantasy per­form­ing a Bloc Party cov­er of This Modern Love, what is now my favourite song of all time1, hav­ing dethroned Blonde Redhead’s Elephant Woman of the hon­our it held for many years. It strips me bare by lay­ers and lay­ers, and even though the lyrics found rel­e­vance in my life before I decid­ed that dis­tance would keep me sane, it’s only in recent months that it’s gone from being a song I nev­er skip to a song I always play.

To be able to see how Owen Pallett repro­duces it with only a vio­lin, a loop ped­al, and his char­ac­ter­is­ti­cal­ly frail voice is a par­tic­u­lar treat. Not only because he can draw the same inten­si­ty in me as in the orig­i­nal ver­sion, but because you can see how it’s done; what part he keeps to present the lis­ten­er with the essence of the song, what he’s changed to fit the tools he uses, and even where he takes his breaths. It’s like find­ing an ele­gant solu­tion for a puz­zle that has per­plexed you for years.

But I’ve yet to sit down and attempt any seri­ous cov­ers of my own cause I’m still wait­ing for my musi­cal knowl­edge and gui­tar abil­i­ty to catch up with what I want to accom­plish. I’ve been learn­ing clas­si­cal pieces for a bet­ter foun­da­tion, and in that pur­suit I came across this par­tic­u­lar ver­sion of La Catedral.

I enjoy clas­si­cal music (though I’m real­ly picky) cause it can evoke a spe­cif­ic emo­tion in me, but most pieces cater to only one emo­tion at a time, or there’s a lot of devel­op­ment before the part I real­ly like. La Catedral, on the oth­er hand, has it all, from sor­row to ela­tion, and every bit of it is bliss. I’m con­vinced that this is how the old Paraguayan gui­tarists rocked out with their cocks out, and it amazes me how some­one could write such heavy emo­tion when there were no met­al idols, no amp dis­tor­tion, no scream­ing back then.

I’d say that for any­one to ful­ly under­stand me, they’d have to under­stand this song too. It rep­re­sents every­thing I love about music and emo­tion and sex, cause it’s all in this song, and only Denis Azabagić plays it the way it was meant to be played2. When watch­ing this for the first time, I remem­ber think­ing that I would make love to this man, this man who looks like some guy’s uncle, because he plays like he’s touch­ing every nerve of my heart.

I love the way he moves with his gui­tar, the way he cra­dles the body, the way he purs­es his lips or widens his eyes with every swelling of pas­sion. To be able to play like him is is exact­ly why I start­ed tak­ing up gui­tar; I want to feel as good as those who lose them­selves to the music, and learn­ing this piece has become anoth­er thing I hope to do before I die.

I did­n’t know I need­ed a week­end like this to feel again. To dance in those lit­tle moments between brush­ing your teeth and get­ting into bed. To pass on the right and speed away to a cho­rus that grows loud­er with every shad­ow cast by every street lamp.

I can’t say it’s been due to any one thing. There’s just so much that seems to be hap­pen­ing late­ly. The days pass faster than ever, and I’m left won­der­ing where life will take me next, cause I’m always sur­prised by every new friend and unex­pect­ed expe­ri­ence. 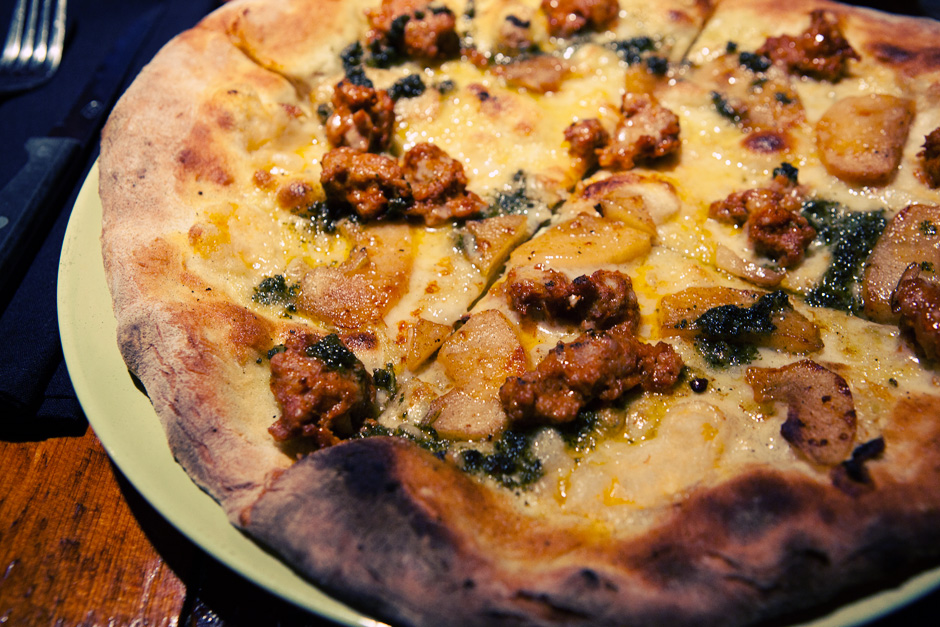 Wild boar piz­za at Tennessy Willems, one of the few wood-burn­ing pizze­rias in Ottawa. A com­bi­na­tion of boar sausage, caramelized apple, sage, roast­ed gar­lic, and sharp ched­dar. The sweet­ness of the apple and the savoury char­ac­ter of the sausage make for an inter­est­ing mélange, but the use of ched­dar is what real­ly gives this piz­za a unique taste.

When I’m drown­ing in emo­tion, it feels like I’m per­pet­u­al­ly com­ing out of the water, emp­ty­ing my stale lungs before tak­ing in as much air as I can again.

This is when every breath is beau­ti­ful. A rush of life com­ing at me.

I feel so dis­con­nect­ed from the world late­ly. It’s not like I don’t have friends who care so much that they make me feel unwor­thy of the atten­tion. I just don’t relate to any­one around me. People with their lives on rails when I feel as uncer­tain as ever. It’s like I haven’t joined their world yet, this world of sta­bil­i­ty and reg­u­lar­i­ty, where every­thing just falls into place. 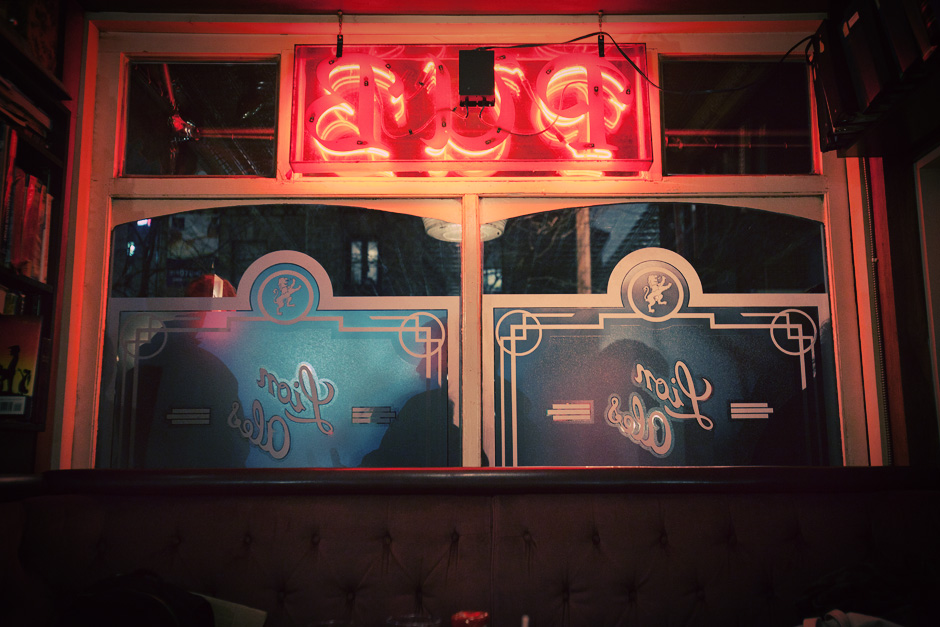 I watch the movies that used to stir the depths of my emo­tions, lis­ten to the songs that would grab my heart and clench to the beat in hopes that I’ll feel some­thing more than this. Every night, every snow­fall, every pho­to­graph is telling me that some­thing needs to change, and I’m left try­ing to fig­ure out what or when or how it’s going to hap­pen.

My vice-of-the-moment is instant decaf cof­fee with loads of sug­ar and French vanil­la non-dairy cream­er; a chem­i­cal sludge I have every morn­ing like dessert for break­fast. That and long show­ers (and maybe a bit of the sauce every now and then) are the only things I indulge in nowa­days.

It’s a sign that instinct has tak­en me over. I do what I want, and I’m start­ing to sus­pect that you’re an adult when that also hap­pens to be the right thing. Not when you hit an arbi­trary age, or have kids, or a career, or a house. It’s when you start to take con­trol because part of grow­ing up is under­stand­ing that you’re respon­si­ble for the results in your life. When you dis­cov­er that there’s no room in this place for old-school roman­tics, so you’ve got­ta play the game. When you lose your inno­cence after accept­ing that the world isn’t the way you thought it was or the way you want­ed it to be.

Still, it’s unset­tling to be ven­tur­ing ahead amidst such uncer­tain­ty. I’ve learned that you can’t wait for every­thing to be per­fect in your life before tak­ing a risk, or you’ll be wait­ing for­ev­er. There will always be cycles of stag­nan­cy and change, calm and storm, hurt­ing and heal­ing. I don’t mind the changes, but part of me resents the inno­cence lost. Quixotism has always been a part of me, some­thing that’s defined so many of my thoughts and pas­sions and work. It’s like I’ve lost a part of myself — and a part I’ve always liked — to mes­sages unre­turned and the days in between.