The dri­ve to Toronto is get­ting eas­i­er. It’s my only chance to real­ly lis­ten to albums nowa­days1, not to men­tion the com­fort of see­ing famil­iar towns on the way, like the names of sub­way stops you can’t help but mem­o­rize as a child on the way home from school. And in a way, so many years lat­er, Toronto still feels like home. Getting there is a jour­ney, but the peo­ple always make it worth it.

My patience tends to wear out about a quar­ter way in, when it becomes hard to main­tain a rea­son­able speed. It’s a test of whether I can dri­ve safe­ly to see how far I’ve grown as a per­son.

I fail every time. 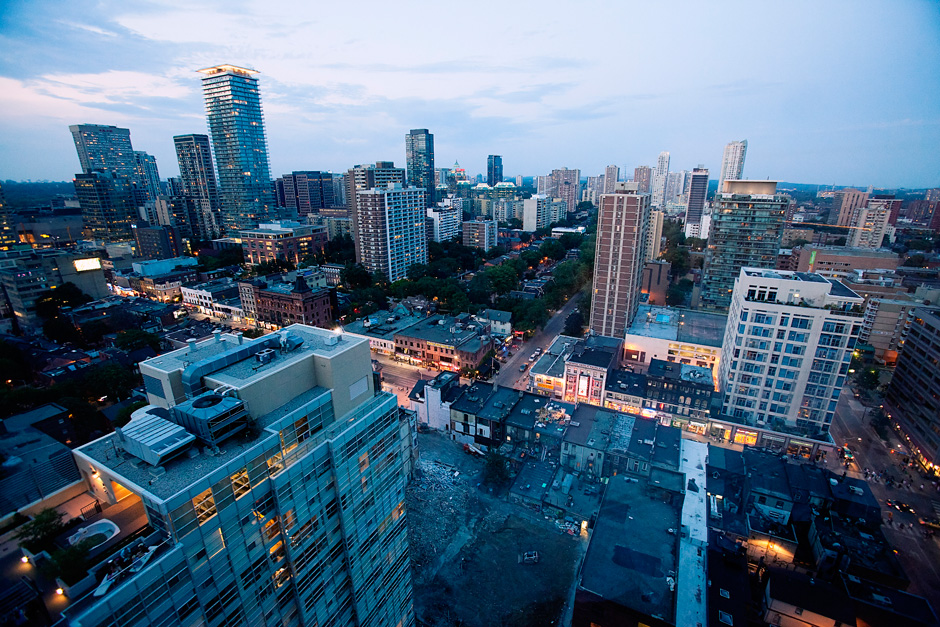 The view from Alex’s down­town apart­ment. You can eas­i­ly tell Yonge Street apart from how bright­ly it’s lit.

I decid­ed to crash at Alex’s place, cause Darren had­n’t moved to his new apart­ment yet, ____ was at his cot­tage, and my dad is still unpack­ing from his recent move. Luckily, Andrew flew in from Texas to stay with Alex for the week­end too, so I got to see them both. The fact that I met them in grade 3 makes them my old­est friends, and they’re the only ones with whom I can always pick up where we left off, even if we’ve been out of touch for years. 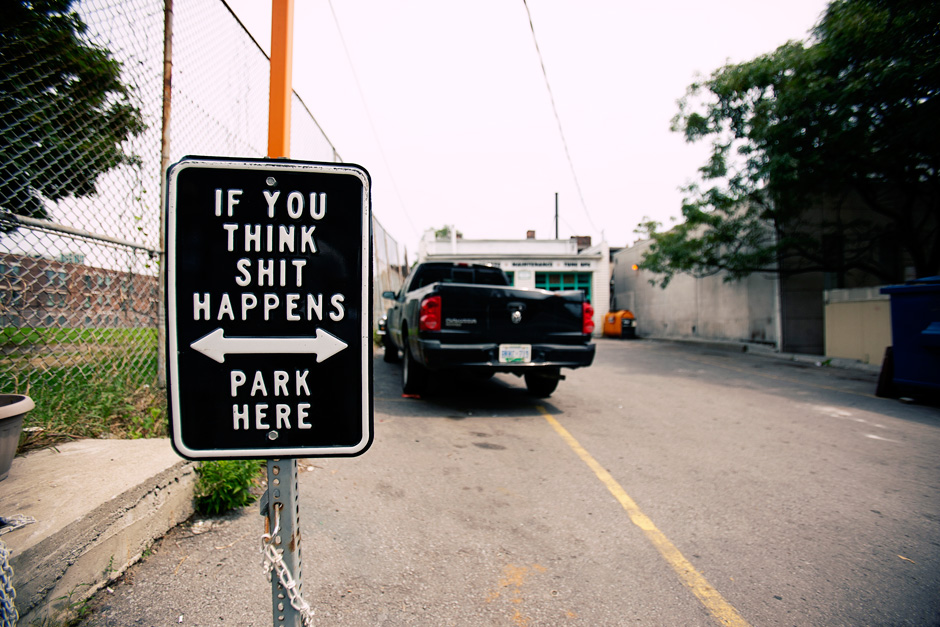 The main rea­son for this trip was to catch up with Dave, an old friend from high-school. I trans­ferred out of UCC to a Catholic school2 in my last year, and he was the only friend of mine to slip through the cracks, until he looked me up and con­tact­ed me a few weeks ago. Before that, it was 12 years since we last spoke.

We were mis­cre­ants back then, sneak­ing off cam­pus by sub­way and rollerblade to grab McDonalds and steal pewter Warhammer 40K fig­ures from Silver Snail (I was the one who dis­tract­ed the clerk with ques­tions). It was the only bit of unscrupu­lous­ness in my oth­er­wise squeaky clean life. I’d prob­a­bly regret it if we ever got caught on any of the stu­pid shit we got into, but we nev­er did. 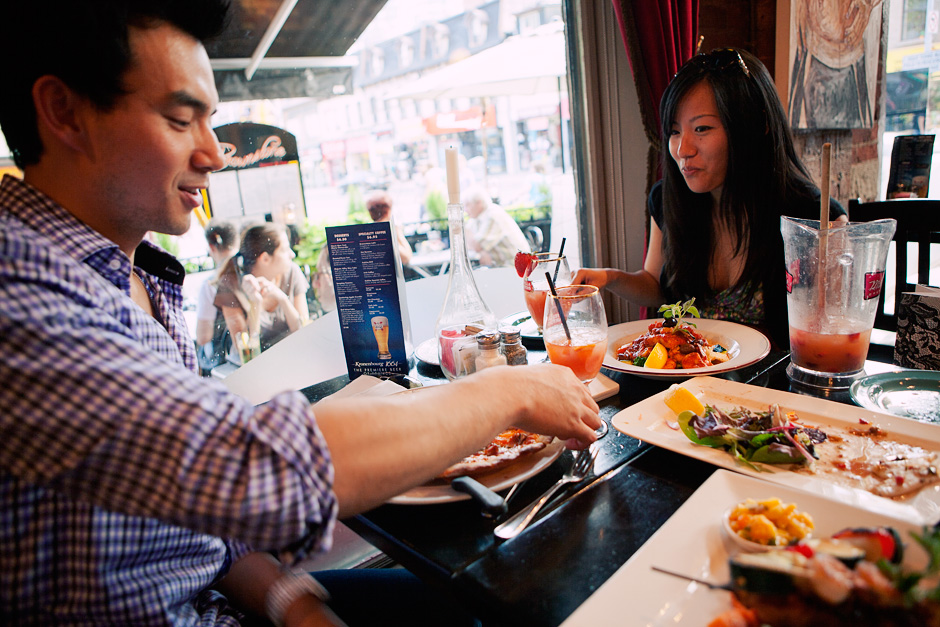 It sur­prised me to learn that Dave did­n’t stay in touch with a sin­gle per­son from UCC, as he was one of the suc­cess­ful and pop­u­lar kids who got along with every­one. But he found the men­tal­i­ty there to be too super­fi­cial and mate­r­i­al, which mir­rored my own thoughts on the insti­tu­tion, prob­a­bly the rea­son nei­ther of us go to the reunions. As he explained to his fiancée Jenny, that meant I was his old­est friend.

She asked if he looked dif­fer­ent, and all I could come up with was that he was more aero­dy­nam­ic, thanks to the hair­cut (I cer­tain­ly must have much more grey hair). Apparently my laugh has­n’t changed at all, and his laugh is the same too, as well as his slight­ly raspy voice and the inflec­tions in the way he talks.

Dave even brought up my best friend ditch­ing me for the rug­by jocks in grade 10, which made me feel worth­less cause it was a time when I felt like I was defined by the friends I had. I did­n’t think any­one else knew3, and the fact that he remem­bers this jus­ti­fies that entire peri­od of my life, one of the dark­est I’ve ever been through. It was nice to get a bit of acknowl­edge­ment of the sit­u­a­tion so many years lat­er. 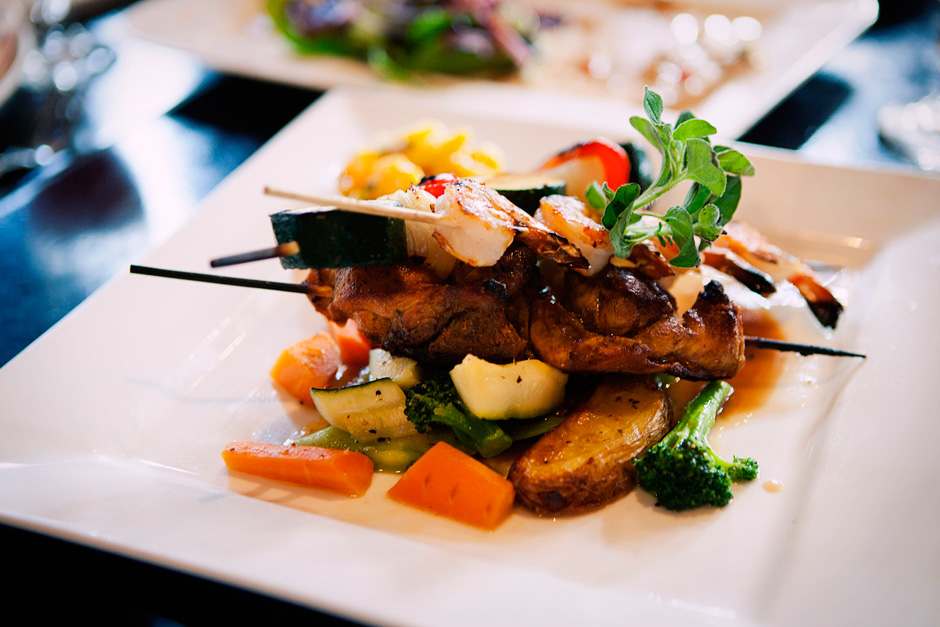 A chick­en bro­chette and a skew­er of tiger shrimp in house demi-glaze, on a bed of roast­ed pota­toes and sea­son­al veg­eta­bles. The first time I’d ever had chick­en instead of steak for surf and turf.

A few things came up over din­ner that made me think I had some kind of indi­rect con­nec­tion with Jenn, one of which was her men­tion­ing of a friend named Ziny. It’s far from a com­mon name, and I thought to myself, “I remem­ber pho­tograph­ing a Ziny once”, but did­n’t bring it up cause I did­n’t know her last name to con­firm.

Then when I gave them a pack­age of white choco­late mousse tea from the Tea Store in Ottawa, Jenny said there was one in Kingston and she’d always want­ed to try tea from there — exact­ly the same thing Alex said to me when I gave him a bun­dle gin­ger green tea ear­li­er that day. That’s when I made the con­nec­tion, and lo and behold, it turns out Jenn went to med­ical school with Alex4 at Queens. Two groups of friends I met at com­plete­ly dif­fer­ent points in my life don’t just know each oth­er, they hap­pen to be good friends too. 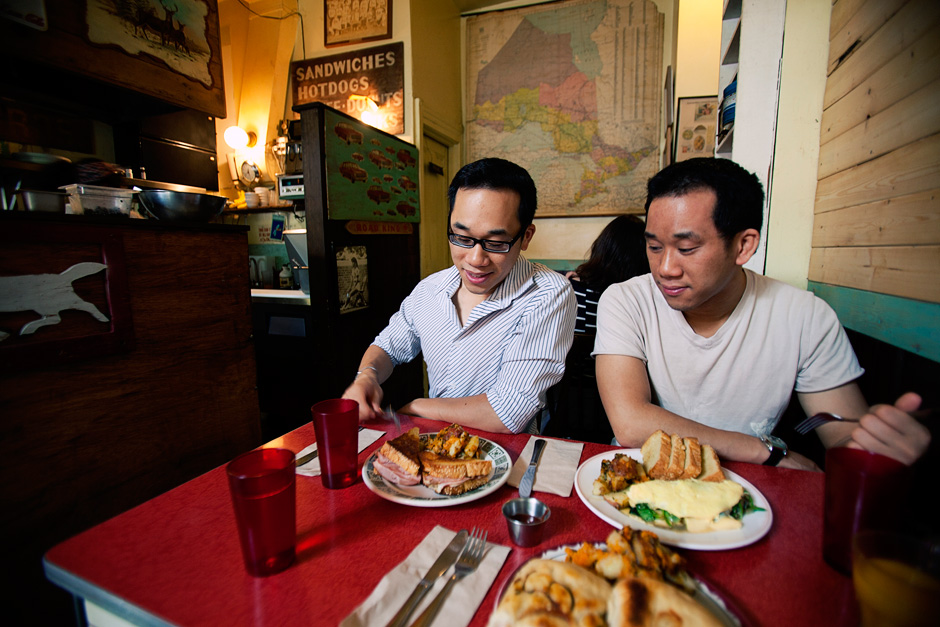 The twins are look­ing less and less like each oth­er as the years go on.

The next morn­ing, Andrew, Alex and I went for brunch at a restau­rant called Aunties and Uncles. The fact that it has great reviews was prob­a­bly the rea­son we wait­ed an hour in line, but that meant we had more time to catch up on love and life and every­thing between. They refused to let me pay, as I’d used the same excuse when they were in Ottawa a few years back. 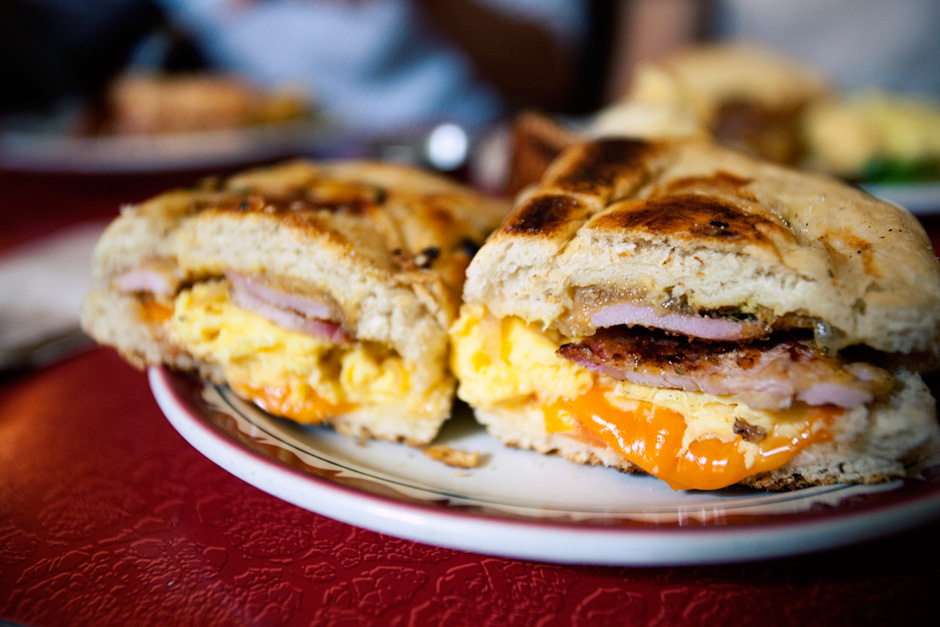 I always believe Toronto will treat me well, and for the most part it does, even though the mess of traf­fic and con­struc­tion tend to pre­vent me from spend­ing any extend­ed amount of time in the city. This time I was there for only 24 hours, my short­est trip yet, but it’s a small world, and Toronto nev­er feels far away.