I’m still catch­ing my breath from the awe­some­ness that was the sec­ond House Show. So much plan­ning, prepa­ra­tion, and prac­tice went into one night that I felt like I’d giv­en birth when it was over; I did­n’t know how to feel, or what to think.

Darren came up the day before to hang out, and along with Shane, Blais (his son), and Chris, stayed until Sunday. After the show we stayed up talk­ing, pick­ing Shane’s brain about his com­po­si­tion process and influ­ences. Everything went bet­ter than I could have planned, and I’m thank­ful that so many of my friends were there to share the expe­ri­ence with me.

Meet the cupcakes (from left to right):

I once sent Shane a rough cov­er I made of It’s A Drag, and he asked me if I want­ed to play it with him at the show. The fact that he lives in Montreal means we nev­er had a chance to prac­tice, so I’m glad it went as well as it did. Being able to play with him was lit­er­al­ly a dream come true.

One of Jesse’s rar­er songs is Heart of a Girl, which does­n’t appear on any of his albums. It’s a great track that does­n’t get enough atten­tion, so I’m glad he decid­ed to do an arrange­ment of it. Having the Famile makes a big dif­fer­ence in his sound, cause it adds so many extra lay­ers that you don’t get with a beat­box­ing alone.

Holocaust Cloak is a great show case of Nic’s skills as a beat­mak­er. His new gear includes an octave-effect box that drops any­thing he sings into the mic by an octave, which lets him do base­lines with his voice. WANT.

I love the way he dances. Em tells me he’s ner­vous and shy, and that his con­fi­dence is an act, but I don’t believe her. Nic is the man. 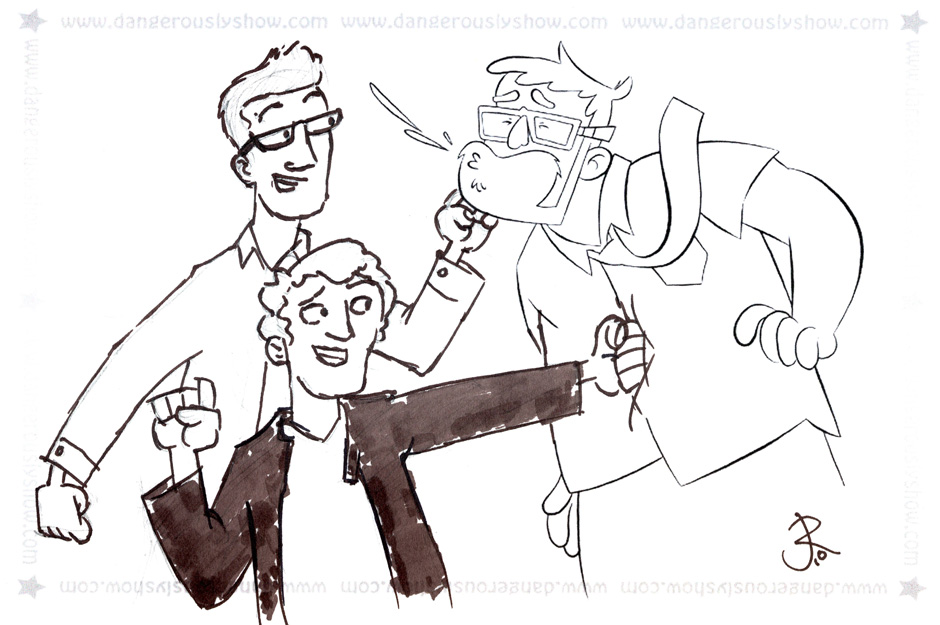 The Digital Henchmen (who are doing the Jesse Dangerously car­toon) had these pre-made post­cards with Jesse in var­i­ous pos­es (get­ting punched in the gut, pig­gy-back­ing, and with his arm wrapped around some­one). They set up at the merch table and would draw you into one of the pic­ture. I could­n’t resist get­ting one of me and Shane giv­ing him an upper­cut and a punch in the gut.