I remem­ber once when I was younger, say about nine or ten, my par­ents took me for a car ride. I had no idea where we were going, because I nev­er ques­tioned them when­ev­er they told me to get in the car. I’ve always been a vic­tim of hum­ming engines, and even today I find it hard to stay awake while rid­ing in a car. I fell asleep and even­tu­al­ly woke up in a parked car with my seat­belt still on, uncer­tain of how much time had passed or where my par­ents had gone. The sur­round­ings were unfa­mil­iar, the park­ing lot, half-full, even more so. I sat there, expect­ing my par­ents to come back any sec­ond.

Not know­ing how much more time went by, I start­ed to ques­tion whether or not they had pur­pose­ly left me there, some decade-late, do-it-your­self, abor­tion. “No”, I thought, “They would­n’t just leave the car, it’s too much mon­ey”. When I could­n’t fight against my sus­pi­cion any longer, could­n’t con­vince myself that they would­n’t just leave me in this lot like a baby on a doorstep, I start­ed to cry. I did­n’t know what to do. I gath­ered up the courage to leave the saftey of the car, and locked the door, know­ing that in doing so I would­n’t be able to get back in, but too scared of get­ting in trou­ble if my par­ents were ever to find out.

Wandering around the adja­cent plaza, my face a com­plete sob­bing mess, I looked for them through the store win­dows. Excuses, apolo­gies, promis­es to be a good kid kept rac­ing through my mind as I won­dered from store to store, being care­ful not to let my eyes off the car. Eventually, I found them in a light fix­ture store, chat­ting with a sales clerk about some wood grain ceil­ing fan. I went in, approached them, and all I could say was, “Where did you go?”. They told me, mat­ter-of-fact­ly, that they went shop­ping and that I should have stayed asleep in the car. After fin­ish­ing their con­ver­sa­tion with the clerk, they left with me, and we all went home. I was shak­en, but hap­py that I was­n’t dis­card­ed because of poor marks of bad piano form.

And even though I wish that the entire inci­dent did­n’t hap­pen in the first place, a part of me won­ders what it would be like if I had nev­er found them. Perhaps a res­o­lu­tion.

An end to the stip­u­la­tions of a con­di­tion­al life. 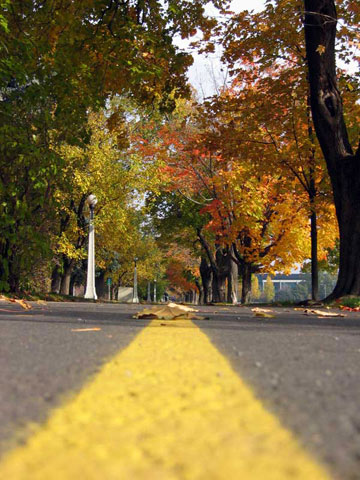 Quite a few weeks ago, on anoth­er Sunday, I woke up with Loo sleep­ing next to me. I could nev­er sleep past sev­en because of my work hours, and Loo rarely gets to bed before 11 the night before. Our sched­ules were, and still are, almost an eight hour shift away from each oth­er. This does­n’t put us in the great­est of moods, and makes us say things that we don’t mean (on my end, at least, I can’t speak for her).

Like on that Sunday, after wak­ing up and sit­ting in the IKEA PELLO for an hour lis­ten­ing to my music, I was grumpy to say the least. I was­n’t tired enough to sleep, but I was­n’t rest­ed enough to do any­thing.

I decid­ed to just get out and walk, not sus­pect­ing how beau­ti­ful the autumn day was. Everything I loved most about the fall was in that morn­ing; the light chill in the air, the lay­ers of colours, the man­i­fest atmos­phere. The walk was brief, just along the canal and back, but it was a shiv­er of the sens­es that only comes out a few days of the year.

When I returned, I still was­n’t in the best of sorts. My frus­tra­tion about our mis­matched sched­ules was start­ing to come through. Loo got up and we argued, try­ing to fig­ure out who was to blame. In the end, I real­ized that it was­n’t either of our faults, but we were both pay­ing for it.

Even though we argued, we end­ed up resolv­ing things, a lit­tle wis­er, and still just as tired. Another hur­dle jumped, anoth­er obsta­cle that won’t get in our way again. I like to think that only good came out of that morn­ing, and that if it did­n’t hap­pen, I would­n’t have expe­ri­enced what I was meant to.

Like watch­ing jog­gers kick up the autumn leaves strewn across the pave­ment.

The more you call, the less I care.

To think, to stop think­ing.

I under­stand. A lack of feed­back is the ulti­mate test of con­fi­dence, one of the many cru­cibles of a rela­tion­ship. The strong make it through, the weak fall apart.

I have to be strong. I have to cast aside my inse­cu­ri­ties, and not look back. I have to trust in Louise as much as she trusts in me. I have to be more open, more com­mu­nica­tive. How can I be sure of what she thinks if I don’t speak to her first?

I have to be strong. I have to treat Louise bet­ter. She should­n’t be pay­ing for my bad days. I have to push through the weight, or we both pay, the vicious bad-mood cycle. I have to be firm first, or there is noth­ing for her to sup­port.

I have to be strong. I once asked Louise for three things, and I can’t be scared to ask for oth­ers. I have to take that leap of faith, because love is noth­ing with­out risk.

Do peo­ple real­ly become stronger from pres­sure? I’ve always cracked, and it feels like I’m crack­ing now. Is this what the strong have gone through?

No one can promise that I won’t get hurt. No one can help me.

And I have to be strong enough to deal with both.