Music sounds so good. It’s like every­thing has a beat I can dance to.

Sometimes I start writ­ing an entry based on notes from a few weeks ago, but I end up dis­card­ing most of them cause I don’t feel the same way any­more. It’s like I’m con­stant­ly shed­ding skin in the words I delete.

I tend not to over-think things now. My deci­sions are based on what I want at any spe­cif­ic moment, instead on the future, or the con­se­quences, or what may hap­pen as a result. This regres­sion has been one of the most impor­tant (and dif­fi­cult) things I’ve learned to do. It feels like I’ve been going in the wrong direc­tion for 30 years, but at least I was able to fig­ure that out before much longer. Now I under­stand Picasso when he said, “It took me four years to paint like Raphael, but a life­time to paint like a child.” 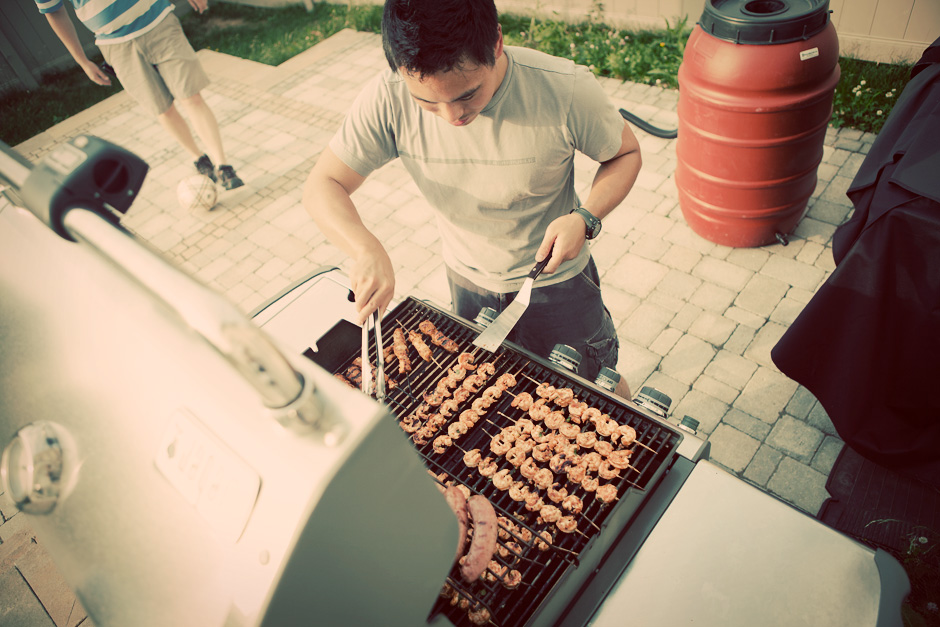 Pat on his new grill. He’s still fig­ur­ing out the hot spots.

I don’t even prac­tice gui­tar any­more, but I’ll put on a song I’m addict­ed to and pre­tend I’m play­ing with my favourite singers for hours. It’s not help­ing me improve (which is usu­al­ly what I enjoy), but by god is it fun.

The weeks lead­ing up to my trip were full-tilt cause I could­n’t stand being by myself. It was nev­er that bad before. I even bought an iPad app that lets me watch ran­dom web­cams from around the world, just so I could have some­thing hap­pen­ing live next to me, even if it was two-thir­ty in the morn­ing. Usually it was a buf­fa­lo chips restau­rant in Florida with mus­tard table­cloths, a beach resort by the sea in Italy, or an over­head cam of a sushi chef in Tokyo1.

Nowadays, I don’t mind the soli­tude or the com­pa­ny. I’m feel­ing unwound and have set­tled into old habits; not get­ting enough sleep, eat­ing at the wrong times, nev­er going out. The main dif­fer­ence is that I get so much less of ____ nowa­days, which means I feel so much more alone, but I’m strong enough to be okay with that now.

The days are bright. Like a boy, I find it hard to con­cen­trate on work when the sun fills the house with warm light.