The tears and the smears on my glass­es which I look through to type this are telling me I’m still not over her. Or per­haps, the idea of her, because she had always held back a part of her­self from being mine com­plete­ly.

This is what hap­pens when a true friend stabs you in the front. I guess I’ve been avoid­ing these thoughts for a while now, and con­front­ed with them in con­ver­sa­tion, the real­i­ty has nev­er been more clear.

Even with the mixed sig­nals, the incon­sis­ten­cy, and the pain, it was still the most sig­nif­i­cant rela­tion­ship I’ve ever had, and that’s what makes it so hard to let go. My oth­er rela­tion­ships may have been free of all the dra­ma, but they also lacked the depth, inten­si­ty, and inti­ma­cy.

There’s noth­ing I would have changed but the end, which dragged on for a year, one suture ripped out after anoth­er. It was far from a clean break, and any­thing but res­o­lu­tion.

I know I was­n’t the only per­son to go through the pain of sep­a­ra­tion, but the break was­n’t sup­posed to last for­ev­er. I was will­ing to step away so I could heal and be strong enough to be friends in time, to be there for her, to be ready to accept the next guy. And most impor­tant­ly, I was will­ing to come back.

She was sup­posed to be strong enough to let me go until I was ready. 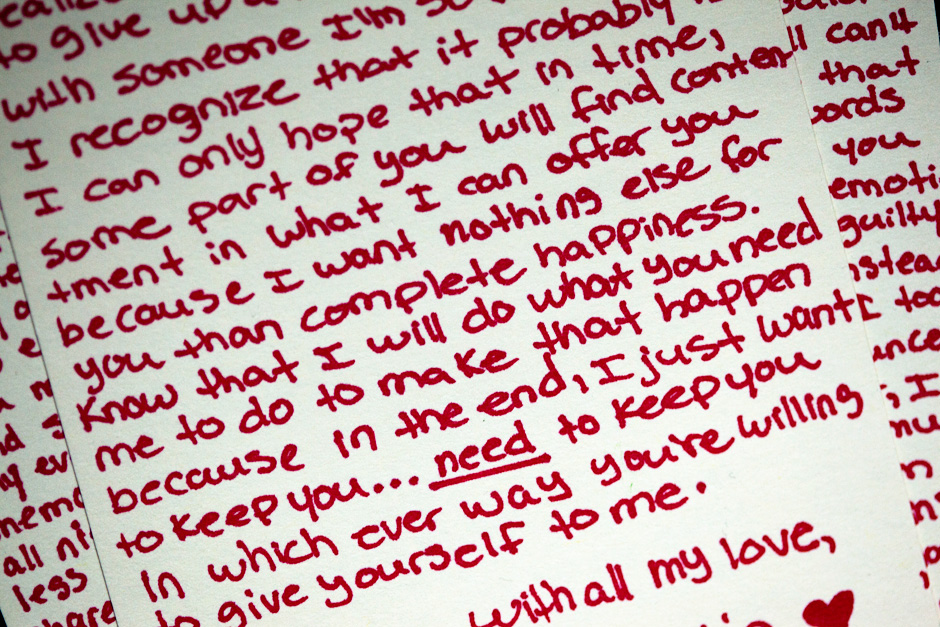 Why could­n’t it have end­ed that night, instead of the mind­fuck that con­tin­ued for months after? Why could­n’t the last thing for her to leave me be the let­ter she wrote on the sta­tion­ary I gave her? Why could­n’t she have kept the promise she made to do what­ev­er it took to keep me in her life, and stayed away?

It’s time for me to real­ize that it’s over.