The house show (announced ear­li­er this year) was a huge suc­cess. I moved a bunch of fur­ni­ture around in the liv­ing room and trans­formed it from this: 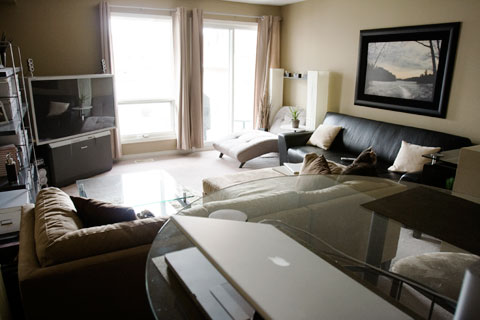 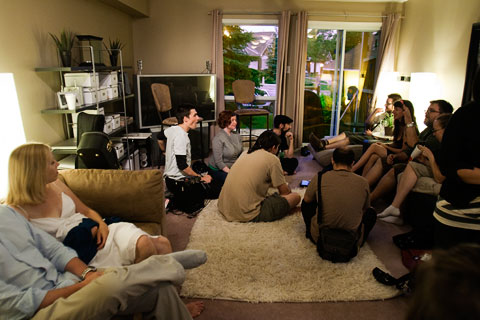 There were almost 30 peo­ple crammed into my liv­ing room for a night of inti­mate music and an ice cream bar1 (on which I spent near­ly $100, includ­ing all the fix­ins). Admittedly, I got a lit­tle over­stim­u­lat­ed and pan­icky some­where in the mid­dle, due to all peo­ple, but Pat and Jen came and talked to me, and they calmed me down. It also got real­ly hot with all the peo­ple in there, so I cranked up the A/C a few hours ahead of time.

Arne, who goes by the stage name Duryea Hawkins and was Shane’s sur­prise guest musi­cian, com­plete­ly blew every­one away with his open­ing num­ber, named Snowman. At the end of the song, you can hear Dan say, “Wow”. It’s so good, I have it on con­stant repeat at the moment.

Once again, Shane ded­i­cat­ed a song to me (woo!), my favourite of course, It’s A Drag. He also did a few new songs I had nev­er heard before; one of the best parts of con­certs is being able to hear new mate­r­i­al that a musi­cian is work­ing on.

And for the first time, I got to see Jesse rap in per­son. He was going to do an all acoustic show, with sev­er­al exot­ic instru­ments, but then Nick (who does the back­ing vocals/beats and goes by the stage name Rockefort F. Loopfrog) bought a loop machine, so they decid­ed to use that instead. Quite dif­fer­ent from the stu­dio pro­duced sounds that I’m used to hear­ing from Jesse, but just as good.

The artists all went home hap­py with the mon­ey that was donat­ed2 and made from the swag they sold.

Since it was my first house show, I real­ly want­ed to enjoy it instead of fuss­ing with get­ting the prop­er shot, so I set up my cam­era and left it on in the cor­ner. Next time, I’m going to do a bit more cam­era work.