A few weeks ago, I received a pack­age wrapped in brown paper at work. It took me a few moments before I rec­og­nized the return address; from the woman who birthed me (I pre­fer not to use the term “mom” any­more). I did­n’t want to open it, because my first sus­pi­cion was that it was a box of ears. Why ears? Well, I’ve seen Oldboy, and let’s just say that in the movie, the main char­ac­ter does some­thing sim­i­lar as an act of penance to some­one he wronged.

This woman can also have a twist­ed sense of log­ic, and it would­n’t me sur­prised if she cut off her ears, along with some­one else’s, to show that she was try­ing to make up for the way she treat­ed me by pun­ish­ing her­self, along with anoth­er poor, unfor­tu­nate soul who donat­ed their ears to the cause. But it was heavy, and curios­i­ty fre­quent­ly gets the best of me, so I opened it, and dis­cov­ered it was a box of moon­cakes. Four moon­cakes, to be pre­cise, and the expen­sive kind with the dou­ble yolk. Then I real­ized it was the Mid-Autumn Festival, so this kind of del­i­ca­cy was­n’t so out-of-the-ordi­nary.

My next thought was that they were laced with arsenic. Who knows what this woman is think­ing; every now and then she goes fuck­ing crazy. I told my office-mate, who said, “They aren’t poi­soned! Your mom’s just try­ing to reach out to you.” I did­n’t believe her, so she said she’d take one home and feed it to her fam­i­ly to prove it to me.

Unfortunately, my co-work­er is only in the office once a week. So there I was at home on the week­end, with these deli­cious, though poten­tial­ly poi­soned, moon­cakes on my counter, wait­ing to see my co-work­er in six days so she could tell me if she start­ed devel­op­ing any signs renal fail­ure.

Part of me was also think­ing I should just throw them out. By eat­ing them, I was accept­ing the ges­ture by this woman — in oth­er words, for­giv­ing her — which was def­i­nite­ly not the case.

The thing is, I’ve always had a weak­ness for moon­cake. Those heavy, deli­cious lit­tle pas­tries that are only made more spe­cial by the fact that they’re only avail­able twice a year (the oth­er time being Chinese New Year).

So I told myself she was just repay­ing part of the debt she caused from men­tal anguish, and there went my pride. I ate just eat a lit­tle piece — an eighth of one cake — and wait­ed a few hours to see if I start­ed expe­ri­enc­ing vom­it­ing, nau­sea, or seizures. Then one piece led to anoth­er, and by the time I knew it, half a cake was gone. 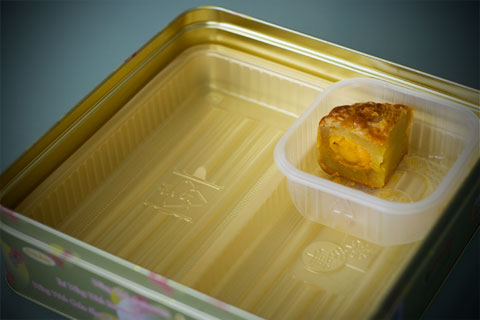 This was sup­posed to be a pic­ture of a box of moon­cakes, but this is all I have left now.