An hour to the new year, and I’m in the train sta­tion.

One of the sta­tion doors is propped open, but there isn’t a sin­gle per­son inside. The sta­tion, nor­mal­ly bustling, is emp­ty, with just the buzz of the lights to fill the emp­ty space. Not even a wait­ing taxi out­side. Everything ster­ile as a hos­pi­tal. I want­ed to take a pic­ture, but I could bare­ly move, so I pulled out my note­book and man­aged to scrib­ble two words: 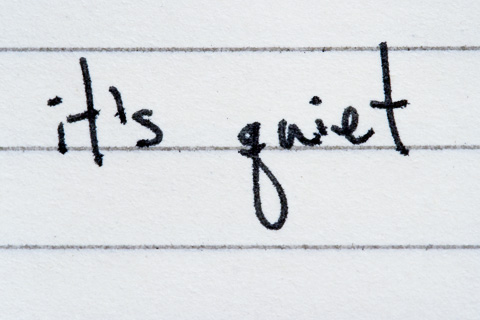 Pat and Jen’s par­ty was post­poned, so I had already decid­ed to stay home. It was ten when Aaron called me to go over1.

Halfway through the bus ride, I was filled with a sud­den rush of anx­i­ety. Maybe it was the peo­ple on the bus, or the fact that I was­n’t men­tal­ly pre­pared to be at a par­ty. I could­n’t breathe, yet I was hyper­ven­ti­lat­ing.

I had to get off at the next stop, which turned out to be the train sta­tion. As I sat inside, the anx­i­ety would pass in a cou­ple min­utes, then come back in a wave as strong as before. I called Aaron and told him I was going to head home, but he insist­ed, so he sent Rob and Doug to pick me up.

I arrived drained and exhaust­ed. It was a hell­ish night.

I can only hope the rest of the year goes bet­ter than this.