I was on my way to work one day, walk­ing down a hill, when I noticed that there was a rather large snail on the ground. He was about an inch and a half long, his shell a delight­ful con­trast of pink and pas­tel hues to dark brown band­ing. I want­ed to take a pic­ture, but I did­n’t have some­thing to car­ry him to work (where I have an infin­i­ty board and white box), so I decid­ed I’d just grab my cam­era on break and bring him there.

Of course, my break was in a cou­ple hours, and I was pray­ing that he’d still be there when I went out­side. I grabbed the cam­era and tri­pod and ran up the hill, look­ing for a small shell cast­ing a shad­ow on the con­crete. 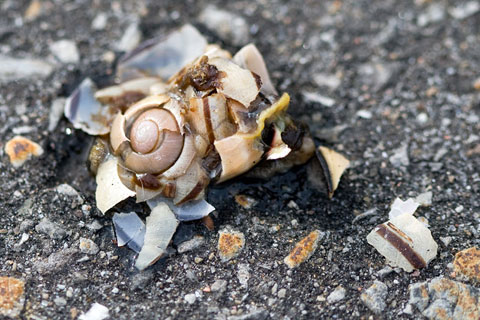 I found him crushed, splayed out in strands of mucus, most like­ly stepped on by some care­less per­son. Snails can’t live with­out their shells, as the cal­ci­um car­bon­ate struc­tures hold their inter­nal organs. I took a few pic­tures of the trag­ic scene any­way.

When I got home that night, I hap­pened to look at the snaps in quick suc­ces­sion and noticed that parts of him were still mov­ing.

He was still alive.

I took a few frames and over­layed them to make this Flash ani­ma­tion, where you can see his foot wrig­gling, as well as some indis­tin­guish­able entrails that remind me of liv­er. It’s so sad to think that he was left out to die a slow death with his innards exposed.

I would have named him Shelly.