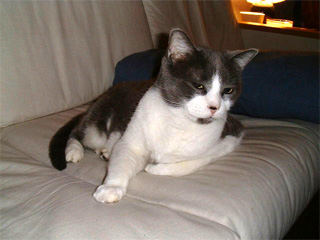 Poor Patches has to be put down today. I have the option of being present dur­ing the process, but I real­ly doubt that I could han­dle some­thing like that. He has­n’t stopped pee­ing and poo­ing on my car­pet for the last few weeks, and does­n’t seem to be very hap­py with Dolly attack­ing him every time she sees him. He’s too old to be adopt­ed by any­one; all attempts to find a suit­able own­er have turned up fruit­less. Since he’s so old and does­n’t adapt well to mov­ing any­way, Trolley, Aaron, and I think it’s best that he’s put down now. He’s lived a very good four­teen years, spoiled by Aaron in his child­hood. Nick and I have real­ly enjoyed him being around these last few weeks (aside from the con­stant car­pet elim­i­na­tion). He was very docile, vocal, and affec­tion­ate, always try­ing to sleep on me whether I was awake or not. Sometimes he would fol­low me around the apart­ment when I was doing chores for the chance that I would sit down and turn into a pil­low. When Nick and I would chill on the couch, he would be the third stooge, always hang­ing out with us. I gave Aaron some time alone with Patches and a bag of Temptations. Everyone will def­i­nite­ly miss him.