For a while now, I’ve had a cycle of favourite songs, but none of them have last­ed very long. The “favourite” slot is only a tem­po­rary posi­tion, which should real­ly be called “song-of-the-moment”. I real­ized I start­ed doing this because none of my music is sacred any­more — every time I hear an old favourite, there’s a mem­o­ry that’s asso­ci­at­ed with it — so I’ve been look­ing for new favourite mate­ri­als, try­ing to find new mate­r­i­al that’ll be mine.

Here are the last eight, in order from least to most recent (going back a few months).

Leonard Cohen — A Singer Must Die

When I first heard this song, I did­n’t know what it was about, but the words drew me in. Cohen paints this strik­ing image of a singer in a court­room, set to melan­choly and min­i­mal­is­tic acoustic gui­tar.

Then read me the list of the crimes that are mine,
I will ask for the mer­cy that you love to decline.
And all the ladies go moist, and the judge has no choice,
a singer must die for the lie in his voice.

And I thank you, I thank you for doing your duty,
you keep­ers of truth, you guardians of beau­ty.
Your vision is right, my vision is wrong,
I’m sor­ry for smudg­ing the air with my song.

I lat­er dis­cov­ered that Cohen wrote it about all artists even­tu­al­ly sell­ing out (the lie in his voice), and this idea that women are turned on by a singer being mar­tyred for it. I love this idea, because I’m always caught between try­ing to retain my artis­tic integri­ty, and at the same time try­ing to appeal to the mass­es to make mon­ey so I can con­tin­ue being an artist and have bet­ter tools that would help me express myself.

Declan de Barra wrote this about his fiancee of five years leav­ing him. It’s filled with the most intense­ly per­son­al lyrics, com­bined with moments of dis­tor­tion and stark­ness. In an inter­view, he once said that this song defines the album, Black Coats and Bandages, and he had to write parts of it in the third per­son because oth­er­wise it’s just too emo­tion­al if he sang it pure­ly from the first per­son. The most com­mon line in the song, repeat­ed qui­et­ly as the piano rolls on, is “I will nev­er love again”. I almost wrote an entire entry ded­i­cat­ed to this song, because I was iden­ti­fy­ing with the lyrics so much at that moment. I read a com­ment once on this song that said, “The goal in life is to nev­er be able to relate to this song”. I agree.

Muse — Map of the Problematique

My favourite song off Black Holes and Revelations. I only like it because it moves so well. That’s pret­ty much it. There’s a break­down of gui­tar at the 1:48 mark that gets me every time.

Okay, it should real­ly be some­thing like five songs on this list by Magneta Lane, because of their two fan­tas­tic albums, but the one that start­ed it all was Wild Gardens (it has a cute video too). This song makes me think of sun­ny days, and green, and par­ties under foliage. I espe­cial­ly like it when Lexi Valentine says, “Now dar­ling she can’t keep on waiting/Till you give a fuck that she’s fad­ing”. I’m still sav­ing enough mon­ey for three engage­ment rings so I can pro­pose to this band. 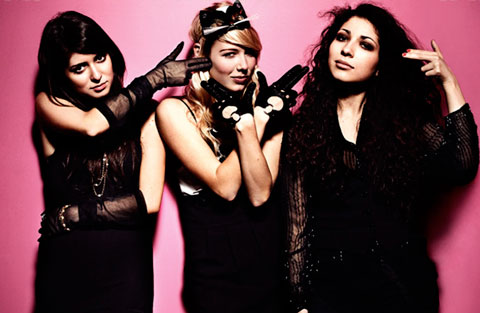 This punk rock pow­er-group, lead by Stza as his side-project from Leftöver Crack, is still char­ac­ter­ized by the calm before (and after) the storm; in this case, gen­tle piano that book­ends the catchy melodies and pow­er riffs. Until We’re Dead adds the cute female vocals of Nico de Gaillo, which gives their sound a nice bit of con­trast against Stza’s raspy voice.

Okay, so this song was only top for two days, but it remains in my top ten, and I still play it when I need that extra boost of ener­gy. Works espe­cial­ly well as the first song when leav­ing the house.

I final­ly found a copy of No Motiv’s album, And The Sadness Prevails. I first gave this song a real­ly good lis­ten when I was deliv­er­ing cas­es for work, which means I was soak­ing up the sun on the high­way, which is exact­ly how I’ve ever heard every oth­er No Motiv album. So, there’s always this per­pet­u­al image of sum­mer that I asso­ciate with them. This is prob­a­bly tied as the best song on the album, pure­ly for the hook and the lyrics in said hook:

so I’ll keep ask­ing
do you like what you see?
because this is all of me
so here I wait for you

And this brings me back to right now. I’m pret­ty much obsessed with this song, an English lan­guage ver­sion of the Spanish poem Pequeño vals vienés. It’s so unlike any oth­er Cohen song before it. I like the idea of giv­ing a song to some­one, which I nat­u­ral­ly relat­ed to. This also offi­cial marks the tran­si­tion of his instru­ments to syn­the­siz­ers, a tran­si­tion I was dread­ing, but sur­vived with an acquired taste.