The sto­ry of a human soul, even the pet­ti­est of souls, can hard­ly be less inter­est­ing and instruc­tive than the sto­ry of a nation…

Many of my ear­li­er entries con­tain ref­er­ences to Russian Romantic lit­er­a­ture, but I’ve nev­er explained my fas­ci­na­tion with it. I’ve always iden­ti­fied with ideas of the Byronic hero and Nihilism, whether they were ideals or philoso­phies I felt drawn to. It was one book that intro­duced me to these ideas, called A Hero Of Our Time by Mikhail Lermontov, a Russian poet (in the truest sense of the word) who died in a duel at 26. Whenever I meet some­one from Russia, I ask them if they’ve read it, in the hopes that per­haps I can gain some insight into this book from some­one who under­stands the orig­i­nal lan­guage. I read it when I was in grade 9, and so much of what the pro­tag­o­nist, Pechorin, made sense to me.

Ah, well! If I must die, I must! The world will lose lit­tle, and I am weary enough of it all. I am like a man who yawns at a ball and does­n’t go home to sleep only because his car­riage has­n’t come.

During a brief phase, I’d say about year off and on in high school, I was at the very depths of depres­sion and some­what sui­ci­dal, but I could nev­er bring myself to do it. I was just hop­ing death would take me. It was an easy way out. Not only did I have no rea­son to live, but my life was quite unpleas­ant. My best friend had ditched me for the pop­u­lar crowd1, so my time at school was mis­er­able, then I’d come home to an emp­ty life and par­ents that ignored me.

Ever since, I’ve felt like I’ve been liv­ing on bor­rowed time, wait­ing for the end to come, when it should have already arrived. That’s why I remain unp­hazed by the idea that I’m going to die, and accept­ing of the fact that it’ll hap­pen one day. As Pechorin says near the end of the nov­el, “After all, noth­ing worse than death can hap­pen — and death you can’t escape!” 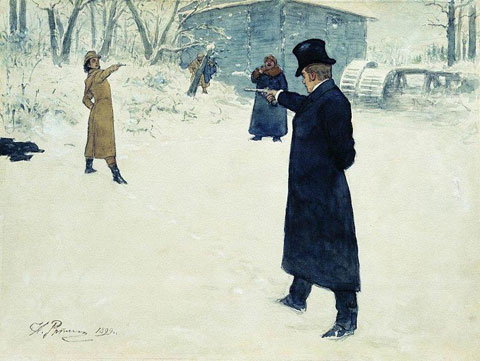 There’s a par­tic­u­lar scene in the movie Onegin2 that cap­tures the spir­it of this mor­bid accep­tance. Onegin (played by Ralph Fiennes) has been chal­lenged to a duel that he can­not back out of, lest he be the sub­ject of ridicule, so he accepts. He’s fired upon as he’s walk­ing towards his oppo­nent, and, faced with death, sim­ply clos­es his eyes. The expres­sion of calm in his face shows that it’s out of reflex, instead of fear.

They are often endowed with many good qual­i­ties, but they have not an ounce of poet­ry in their souls.

One of the antag­o­nists of Pechorin is Grushnitsky, a poseur who walks with a fake limp to draw sym­pa­thy and wears a great­coat to look impor­tant. Pechorin and I share the same mock­ing scorn of such “fop­pery”. What can I say. I hate fake peo­ple. The ones who put on affec­ta­tions to seem unique or eccen­tric. The ones who pre­tend to be what they’re not. I know too many peo­ple like this, and I try to avoid them as much as pos­si­ble.

I don’t com­plete­ly agree with Pechorin’s atti­tudes towards women, as they can be quite sex­ist (he fre­quent­ly com­pares them to thor­ough­breds, for exam­ple), but I do relate to his frus­tra­tions, and very con­tra­dic­to­ry opin­ions on them. It’s a love/hate rela­tion­ship — the typ­i­cal “can’t live with, can’t live with­out” idiom — that’s at once bor­der­ing between the indif­fer­ent and the impas­sioned. Perhaps this is due to the fact that my expe­ri­ences with women are so polar­ized. After all, the ones we love the most are also the ones that can hurt us the most.

Much of my child­hood was spent feel­ing great­ly dis­il­lu­sioned with the world. I was liv­ing with my par­ents, who made me believe that emo­tions were bad, not because they’re use­less, but sim­ply because the only emo­tion I expe­ri­enced with them around was depres­sion. I felt unloved and use­less, so I tried to cov­er up these sad emo­tions with log­ic, and Pechorin seemed to share this habit. It’s all the more relat­able because he’s not com­plete­ly in con­trol of them. He’s flawed and human, even though he’s part of the intel­li­gentsia.

Even now, I find myself con­stant­ly try­ing to bal­ance my emo­tions, because I simul­ta­ne­ous­ly appre­ci­ate them for their inspi­ra­tion, and despise them for their effect on me.