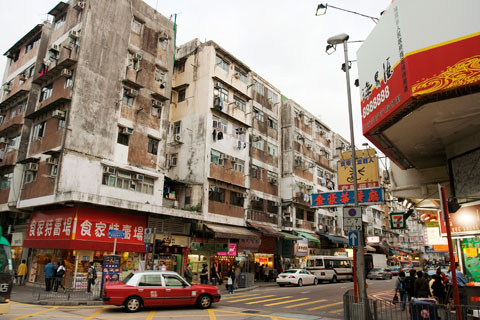 My grand­ma’s apart­ment is in Kowloon City, a very old area of Kowloon, char­ac­ter­ized by dirty build­ings and slum­my areas. There’s so much char­ac­ter here. It seems like every shop has a sto­ry, and every street a his­to­ry. My dad told me that since it’s so hard to find park­ing, some restau­rants have a valet park your car for you if you go in.

Since it’s a long-estab­lished area, there’s pret­ty much every­thing you need with­in a cou­ple blocks, or a few min­utes walk. This includes:

One of Hong Kong’s famous real estate agents said that liv­ing in such high den­si­ty is a habit, and that Hong Kongers could expand out­ward (instead of upward) if they want­ed to. I can under­stand why this is true, because every­thing is so close and con­ve­nient. When you live in the mid­dle of all this, you real­ly feel like you’re part of the city’s pulse. 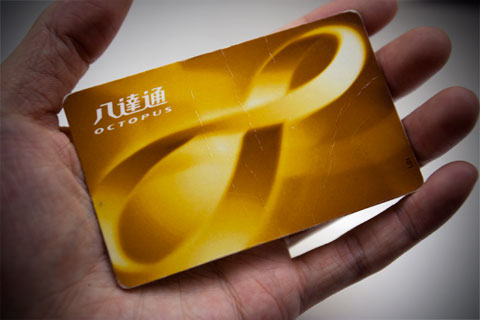 Everyone car­ries an Octopus card in Hong Kong, because it’s used every­where. When you take the bus, you pay the fare by tap­ping your wal­let (with Octopus card in it) on the scan­ner; the fare may change depend­ing on whether you take it before or after cross­ing the har­bour. Subway fares aren’t flat-rate either, so short­er routes are cheap­er. The dis­tance you trav­el is tracked by scan­ning your card when you get on and again when you get off, and the appro­pri­ate amount is deduct­ed.

Even vend­ing machines, park­ing meters, con­ve­nience stores, and restau­rants have Octopus scan­ners used to pay for their ser­vices. It’s also used as an iden­ti­ty sys­tem, where stu­dents sign-in to class by tap­ping their cards on door scan­ners, or res­i­dents enter their apart­ment build­ings with­out need­ing a key.

The Chinese name for the card is “eight arrived pass”, because eight has spe­cial mean­ing in Chinese, espe­cial­ly when it comes to direc­tions. The English name comes from an octo­pus hav­ing eight ten­ta­cles, and the logo is an infin­i­ty sym­bol that’s also in the shape of an eight. So clever.

Grandma loves her par­rot. We car­ry it around for her, and she sleeps with it on her bed­side table. Whenever she talks to it, I can nev­er real­ly tell if she real­ly is talk­ing to her par­rot in an act of senil­i­ty, or whether she does it to humour us.

A note on the trans­la­tion: The name “Fat Bird” is real­ly “Fat Woman Parrot” in Chinese. The word “par­rot” is a homonym for the last part of grand­ma’s name, so “Fat Woman Parrot” sounds like it’s refer­ring to her as well. That’s how she got her nick­name as “Fat Woman”.

This is grand­ma on a good day. I love to see her smile and laugh.

The best place to see Hong Kong’s sky­line is at Victoria Harbour. Along the walk­way is the Avenue of Stars, Hong Kong’s ver­sion of the Hollywood Walk of Fame, as well as a bus ter­mi­nal, and the dock­ing area for the Star Ferry.

The world’s largest per­ma­nent light show is here, run­ning every night at 8:00, where many build­ings across the water time their lights to music. I record­ed it, but my footage did­n’t turn out so well with the fog. So here’s some­one else’s awe­some record­ing, that does the show jus­tice.